David Deutsch is the root cause of years of severe harassment against me and other FI community members. I've asked him to write a brief message requesting his fans stop hating and harassing, but he won't. None of the people involved will try to settle this privately with me. So I made an infographic to explain the situation. Click the image to expand, or view as a PDF:

Andy's first attempt to post #1 was automatically blocked by my security measures. He then used hacking tools to break past the security measures in order to post #1 and #2. There are laws about bypassing computer security systems. (This isn't the first time.)

> The thing most technologists would do well to internalize is the notion of fraudogenic environments, where one can (unintentionally!) set up an incentive system which causes fraud to happen w/o there being a top-down directive to commit fraud.

> This is against the intuitions of a lot of people, who think there is some seedy back room where four senior banksters in suits have developed a multi-billion dollar fraud and want them marched out in handcuffs.

> And then reality is like "Whelp, the actual guilty parties are a few thousand retail-facing employees who, under intense pressure from bosses to hit quotas *because they work in sales and almost all sales is like that* lied to customers *and their employer.* Still want prison?"

DD created a toxic, harassment-ogenic atmosphere with nasty incentives and pressures, rather than giving direct orders in a seedy back room.

#4 A lot of ppl would be nazi prison guards if they were in that kinda situation with the pressures and incentives that existed in nazi germany. we shouldn’t hate the majority of ppl for that weakness, but we should blame the leaders who create such toxic situations.

Elliot, this is ridiculous. I'm sure you understand why I can't possibly respond to something like this.

#6 I don't know if you're DD or not. Send me an email to confirm identity. If you're actually DD, I'll be happy to discuss this matter by IM, phone, email or here.

I do not understand why you can't or won't ask your followers to stop their campaign of harassment. It's a normal thing for online people with a following to be concerned with whether their community is brigading, harassing, doxing, etc. I often see people reign in their communities.

I've determined that #6 is by Andy B, who is impersonating DD.

I determined that #6 was by the same person who posted with the author name "Andy B" at https://curi.us/2409-andy-b-harassment-update#2 and I also linked that person to "chris p".

Here's an example of a CritRat – either Andy B or someone else from that toxic community – making it clear that the reason they're harassing and targeting me is because they see me as DD's enemy. This kind of statement has been a recurring theme.

> Curi has denigrated Deutsch over and again. He is no fan, he is no friend. He is an enemy of the fans of David Deutsch. He should be shunned. It is laughable given some of the things he has said over the years, that he represents anything like a community of fans of Deutsch. He is a danger to any such community and should be taken seriously as a threat to the ongoing harmony between actual fans and progress towards improving and promoting David’s worldview.

It also includes the lie "We’ve asked politely and clearly." coming from an anonymous person who didn't disclose what group "we" refers to, and with no dates, quotes, askers or communication mediums specified. It's trying to smear me as someone who is ignoring repeated, polite direct requests, and violating consent, but that's straight up lying. I repeatedly asked what they wanted and they refused to tell me their requests or demands. What would it take for them to leave me alone? I'm posting at my own blog, as usual, and I want the campaign of harassment to stop (which follows me around, e.g. here, instead of being done at their own sites), and there has been no such campaign going the other way.

I made a simplified version of the infographic: 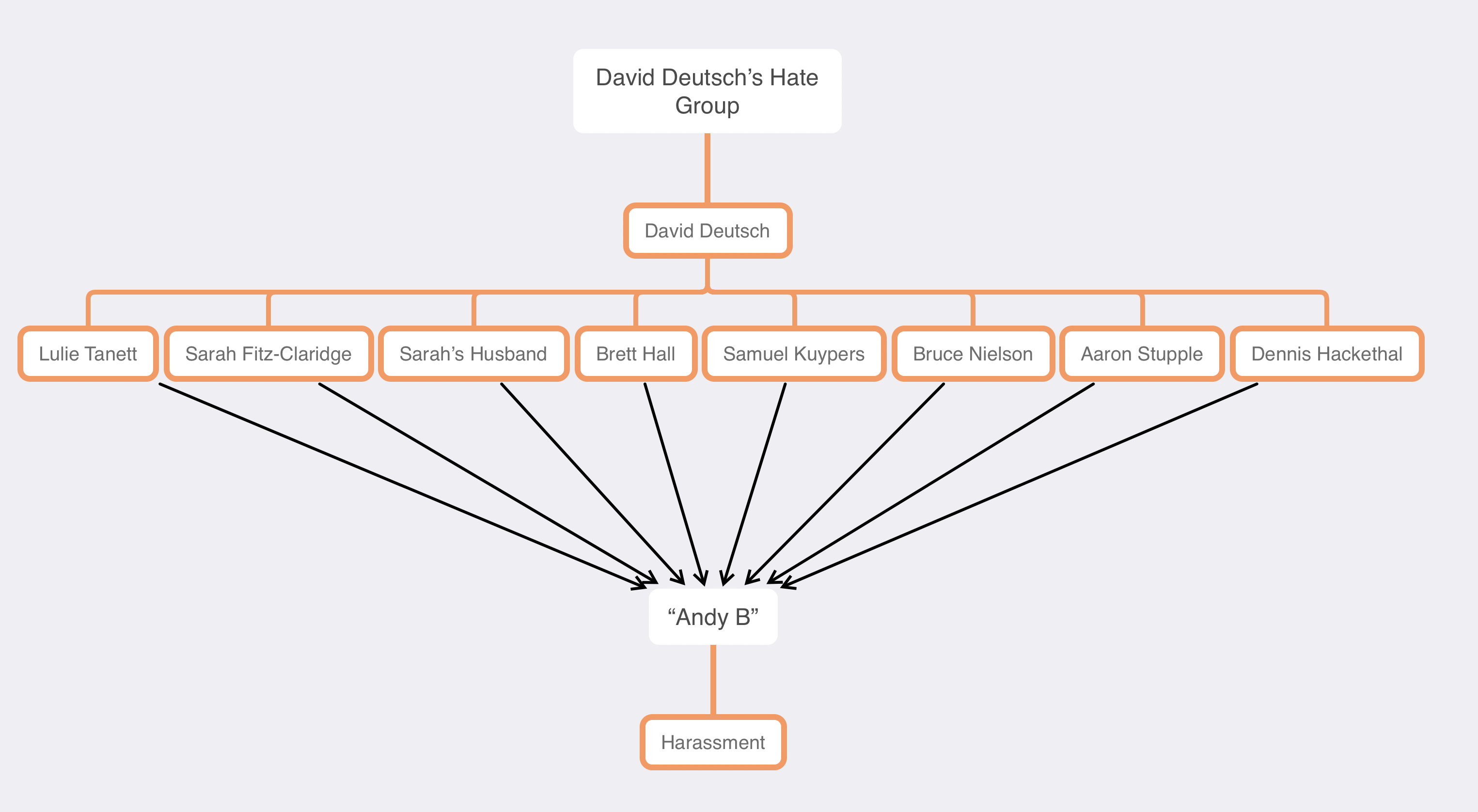 If you know how to make a better infographic, please do.

I agree with David

#6 I came upon this page from your newsletter. It seems like it is coming from a place of extreme paranoia.

I don't know much about you or your history, I'm just giving you an honest impression as your fan.

I have a lot of intelligent friends who suffer from paranoia, it's hard to know what to do while in this state of mind. So use a trusted friend, and have them help you calibrate your reality-filter. I what you are saying is true, work with them to reframe your writing so that it doesn't present like this.

#12 You agree with David about what? David has expressed no position. He didn't make some claim to be agreed with. He didn't dispute something.

You're publicly attacking a victim without acknowledging in any way that they are a victim or showing the slightest sympathy regarding the multiple crimes ongoing over multiple years.

You also have not disputed any fact, nor given any argument about which step in curi's reasoning is false.

You also say to reframe if true, but have provided no specifics about what sort of reframing you suggest. That is not actionable advice. You say don't present like "this" without saying what "this" is or what you think would be better.

> You're publicly attacking a victim without acknowledging in any way that they are a victim or showing the slightest sympathy regarding the multiple crimes ongoing over multiple years.

You are no fucking victim! You are just a paranoid psycho with BS conspiracy theories.

#12 and #14 are from different IP addresses and may be different people. Looks like more harassment. Either it's all harassment or a harasser is trying to piggyback on #12 (If #12 is real, send me an email to confirm that, Scott.)

There was also a #15, from another IP, which I removed, which consisted of profanity directed at #14 but was probably written by the same person as #14. I think it was trying to make my supporters look bad or just to troll in a confusing way (by allegedly being on my side).

re this post and other related posts, DD and many of his fans will not look at whether i’m right on each individual point. they will see overall that i’m making DD look bad and in some kinda conflict with him, and then assume i’m wrong based on how much they dislike my conclusions. i don't know a fix for this.

Why would esports leagues partner with criminals? What the hell is wrong with them? Reminiscent of CritRats partnering with Andy.

Scott did not email.

Here's an example of a stalker who is worse than Andy, but the police didn't take it seriously when he went to another state to stalk the girl. They just sent him home. When he left his state again to go to her city, and got caught irl a second time, *and confessed everything*, then they put him in jail. But just a bunch of online stalking/sockpuppeting/harassment followed by traveling to find her IRL was initially not taken seriously by the police.

I knew that one of the purposes of communicating like that is that people on all sides of an issue can think you agree with them.

I didn't know that was in *The Fountainhead*. So many things are in Rand (my emphasis):

> Grocers and deck hands had not appreciated Gail Wynand; politicians did. In his years on the paper he had learned how to get along with people. His face had assumed the expression it was to wear for the rest of his life: not quite a smile, but a motionless look of *irony* directed at the whole world. *People could presume that his mockery was intended for the particular things they wished to mock.* Besides, it was pleasant to deal with a man untroubled by passion or sanctity.