Here’s an explanation of discussion tree diagrams with an example. And here’s another explanation below (actually written first, even though posted second): 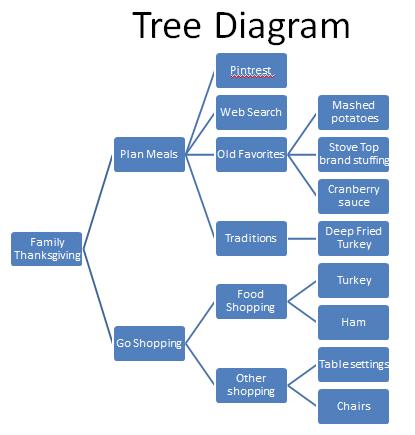 You can create tree diagrams with pen and paper or with various software options (some are mentioned in my other post on discussion trees).

Trees like this are always equivalent to outlines with nesting. Nesting X under Y in an outline is the same as drawing a line from X to Y in a tree (with Y below or to the right of X, depending on whether it’s a top-to-bottom or left-to-right tree). You can do both trees and outlines to get comfortable with how they’re the same. Both represent parent/child relationships (that’s standard terminology) where some things are attached underneath others. For discussion trees, replies are the children which you put under the thing they reply to. The “parent comment”, like on Reddit, is the thing being replied to.

Example outline which is equivalent to the tree:

To outline well, you need to be able to write short summaries. E.g. take a three paragraph argument and condense it to one sentence for your outline. This is a skill you can practice by itself.

With practice you can remember more stuff without writing it down. This isn’t automatic. It’s something you can work on or not. It helps to try to remember stuff, and to reread the conversation to look up stuff you did not remember. And it helps to consider it important when someone refers to something you’d forgotten, and go reread it and take note of your memory error (try to find patterns and causes for your memory errors).

A related thing to practice is remembering what you say or read in general. You can quiz yourself on this. After reading something, try to write down what it said without looking at it. Start with shorter stuff (or break longer things into parts, like reading one paragraph at a time). If you get good at this and find it easy, do it with longer stuff and/or do it after a delay (can you remember it 5 minutes later without rereading? 20min? 3 hours? 3 days? 3 weeks?). And do it with your own stuff too. After you write something, try to write the same thing again later. See how accurate you can be for longer stuff and after longer wait times. You can do this with spoken words that you hear or speak, but you won’t be able to check your accuracy unless they were recorded.

People often don’t clearly know what they just read, or can’t keep it in their head long enough to write a reply (e.g. if you spend 30min writing a reply, you need to either remember the text you’re replying to that long or reread it at least once to refresh your memory). People often partially forget, partially remember, and don’t realize the accuracy loss happened (and don’t realize they should selectively reread key parts to double check that they remembered those accurately).

It’s also good if you can clearly remember what you said 1-3 days ago, which someone just replied to. You’ll often get replies the next day after you write something. And to the extent you don’t remember, it’s important to realize you don’t remember, recognize you don’t know, and reread. It’s also good if you can remember details from earlier in the conversation, which could be a week or more ago – and if you don’t, you better review relevant parts of the conversation back to the beginning if you want to write high quality comments which build on prior discussion text.

However, notes and outlines aren’t just like training wheels, they are also good things which you shouldn’t expect to ever entirely stop using. They’re useful for practice but also just useful. With practice, you may learn to use them less but still use them. Or you might use them more with practice as you get better at creating and using them. Remembering everything in your head, instead of using tools, is not necessarily a good thing. Remembering some stuff is useful but there is some stuff you shouldn’t be trying to remember. Remembering basically means temporarily memorizing. The anti-memorization ideas you already know about have some relevance.

Also, notes, trees and outlines are useful for communicating with others. You can use them in the discussion. If the other person gets lost and confused, or there is a disagreement about what happened in the discussion, you can share your outlines/trees/notes to communicate your view of what happened. This can remind the person and help them, or it can be compared with their outlines/trees/notes to figure out specifically where you differ (find somewhere your outline is different than theirs, go reread the original text, find and fix someone’s error).

Sharing discussion trees/outlines is a good way to help figure out what’s going on in difficult discussions that become chaotic. Most people don’t have the tree in their head, didn’t try to keep notes, and also can’t (don’t know how to) go back and create the tree for the current discussion. Sadly, people also commonly don’t want to review a discussion and create a tree. That’s because it’s work and people are lazy and/or think discussion should be much easier than it is. People have incorrect expectations about what it takes to discuss well, so if it’s not working with ease they blame the other person or they blame bad luck and incompatibility, but they don’t usually seem to think the thing to do is increase their skill and put in more effort.

Many people avoid resuming conversations after the first day – they want to talk a bunch at once (e.g. talk for an hour) and then never continue later. This is a really common way trying to discuss issues with people sucks and fails. It’s hard to get anywhere with people like this. A major cause of this problem is their bad memory skill. They don’t want to continue the discussion the next day because they forgot most of what was said. To be good at truth seeking, you need to be able to discuss things over time, which requires both memory and willingness to review some stuff sometimes.

This section is some more advanced and optional material.

A discussion tree can actually be a directed acyclic graph (DAG), not a tree, because one argument can reply to 2+ parents. In that case, a bullet point style outline won’t represent it. However, you usually can make a good, useful discussion tree without doing that.

Directed means the connections between nodes go in a particular direction (parent and child) instead of being symmetric connections. Nodes are places on the graph that can be connected, they are parents or children – specifically they are discussion statements. E.g. “Go Shopping” and “Cranberry Sauce” are nodes. Acyclic means the graph isn’t allowed to go in circles. You can’t have node A be a child of B which is a child of C which is a child of A.

A DAG can always be put in a topological ordering (linear order, 1-dimensional order, similar to an outline or list) which could maybe be useful. Cycles ruin that ordering but aren’t allowed because no statement in a discussion can be a child of a statement that was made at a later time. A child of node N is a reply to N. Because statements don’t reply into the future (and we can treat all statements as being added one at a time in some order), cycles are avoided.

Statements do reply into the future in a sense. Sometimes we preemptively address arguments. One way to handle this is to add a new argument, C, “A already addressed B preemptively”, as a child of B. This gets into the “last word” problem. Even if you preemptively address stuff, people just ignore you or make tiny changes to try to make a new comment required. The big picture way to deal with this is by criticizing their methodology – they are creating a pattern of errors which need to be addressed as a pattern instead of individually.

This completely fails to account for inexplicit knowledge that can be contained within a conversation.

you should understand the explicit knowledge as a starting point. it's easier and the inexplicit, implied and between the lines stuff refers to it.

if u can't understand the objective, logical aspects of the conversation, you are in a bad position to understand other aspects.

the blog post didn't present itself as complete. it's offering some info and tools. the things they help with are important both generally and to the specific goal of dealing with inexplicit knowledge well.

curi, would you ever debate someone on video or do you only do it on your email group or this website.