Cato tweeted a graph from their Human Progress project:

This graph is dishonest lying with statistics in several ways.

On the left, the numbers go from 200 to 800. These are millions of chinese people living in some definition of poverty. What happened to 0? They designed the graph so the change goes from above the top to bellow the bottom. A more accurate graph would show numbers from 0 up to China's population size (now around 1.35 billion). Cato cut off around 40% of the numbers on the left to make the graph look bigger, and leaving out 0 is a well known dirty trick.

On the right, it's even worse. The right side shows some kind of economic freedom number, from 1 to 10. But they numbered their graph from 0 to 6. They made the bottom actually go lower than is possible with their own metric. Why? To make the change from around 4.75 to 6 look way bigger than it is and to have it reach the top of the graph. A 6 out of 10 should not be at the very top of the graph! And the graph shouldn't go down to 0 when dealing with something that can only start at 1.

The graph title also suggests the graph has to do with economic freedom for the whole world by using the phrase "Economic Freedom of the World", but the graph is only about China (I think, going by how the two lines are both labelled as being for China only).

Overall, Cato is trying to show economic freedom going up and poverty going down. Eyeballing it, it looks to me like poverty went down more than economic freedom went up, using these metrics. Rather than discuss how correlated they are, or try to explain the right way to think about the issue, Cato created a grossly dishonest graph to mislead people. Cato is prioritizing shiny publicity over truth.

I also made a better chart so you can compare. For the data points, I eyeballed them from Cato's chart (not all of them, that's why it's smoother). Don't it super seriously as a fact about the world, I just wanted to see how it looked with the left and right axes fixed. 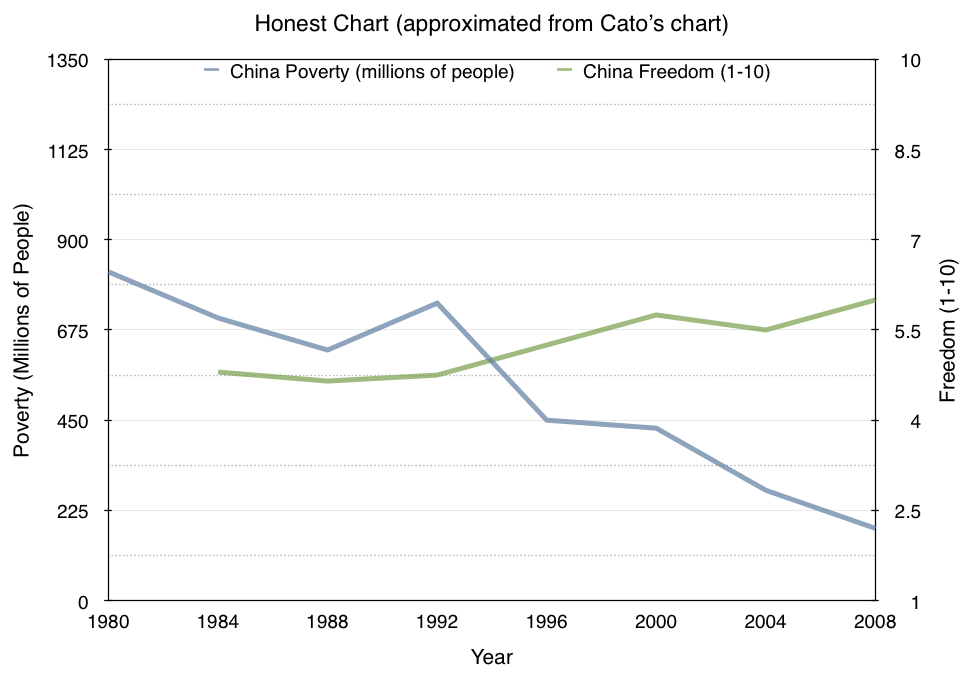