We can be proud of what we have achieved so far together, and especially proud that as we have taken hard decisions on public spending, we have protected the National Health Service, with 9,500 more doctors and 6,900 more nurses, and ensured generous rises in the State Pension.

Government doctors and big government pensions are not conservative ideas.

Objectively, it's wealth redistribution. It's taking money from some taxpayers to give it to others or spend it on others. It's deciding, contrary to the free market, that some people should have less wealth and others more. That is anti-capitalist.

We have a plan for every stage of your life

What about small government? What about being hands-off? What about letting people plan and run their own lives? Why does the government need to be involved with your whole life? Why can't the government stick to functions like police and courts which have to do with the use of force?

we will continue to increase spending on the NHS

we will create 3 million new apprenticeships; take everyone earning less than £12,500 out of Income Tax altogether and pass a law to ensure we have a Tax-Free Minimum Wage in this country

Minimum wage is an anti-capitalist idea. Lowering taxes specifically on low earners is not exactly a conservative idea.

we will extend the Right to Buy to Housing Association tenants, build 200,000 new Starter Homes – 20 per cent below the market price, for first-time buyers under 40 – and provide 30 hours of free childcare to working parents of three and four year-olds – so you are able to work while having the security of your own home in which to raise your family

Government housing and government paying for childcare? What is conservative about that? This is left wing. In the UK, Labour is left wing, and then the Conservative party is full of left wing ideas too.

we will continue to increase the Basic State Pension

Out of the 7 stages of life, 6 have substantial anti-conservative ideas. One (not quoted) said they won't raise some taxes and will help with a couple specific taxes.

The next Conservative Government will secure a better future for you, your family and Britain.

What happened to the idea that the government should get out of the way, and individuals secure their own futures?

What about the people who think public services are a bad idea? The Republican party platform doesn't read like this.

We will increase the number of teachers able to teach Mandarin in schools in England, so we can compete in the global race.

The Republican platform does not have the words "Spanish" or "Mandarin". Having the government promote foreign languages is not a conservative policy.

This platform affirms that America has always been a place of grand dreams and even grander realities; and so it will be again, if we return government to its proper role, making it smaller and smarter.

We are the party of maximum economic freedom and the prosperity freedom makes possible.

Parents are responsible for the education of their children. We do not believe in a one size fits all approach to education and support providing broad education choices to parents and children at the State and local level.

The US has a more diverse political spectrum than Europe. We have plenty of extreme leftists, but we also have, in the mainstream, ideas like capitalism and limited government. In the UK, the supposedly right of center mainstream party likes government services.

In sum, on the one hand enormous amounts of money are being spent for K-12 public education with overall results that do not justify that spending. On the other hand, the common experience of families, teachers, and administrators forms the basis of what does work in education. We believe the gap between those two realities can be successfully bridged, and Congressional Republicans are pointing a new way forward with major reform legislation. We support its concept of block grants and the repeal of numerous federal regulations which interfere with State and local control of public schools.

This is not what I regard as perfect. It's not getting the government totally out of schools. But it's going in that direction more instead of praising public services. It's looking for more variety of education, chosen by local communities, rather than a gigantic public school system with decisions made by central government.

Federal student aid is on an unsustainable path

That's about college tuition. (The problem is colleges ask about your finances, then charge whatever you can pay, plus whatever the government will pay.)

The United Nations remains in dire need of reform, starting with full transparency in the financial operations of its overpaid bureaucrats. As long as its scandal-ridden management continues, as long as some of the world’s worst tyrants hold seats on its Human Rights Council, and as long as Israel is treated as a pariah state, the U.N. cannot expect the full support of the American people.

Our Unequivocal Support of Israel

That's a section title, read the pdf for details. In the US, we have pro-Israel and anti-Israel (e.g. Obama's) ideas.

Now let's go back to the UK Conservative party:

support a two-state solution to the Israeli-Palestinian conflict, robustly defending the right of Israel to protect its security, while continuing to condemn illegal settlement building, which undermines the prospects for peace

This is the only text on Israel. It is anti-Israel. It condemns Israelis building and living in homes on land they own – a standard applied to no other country. This is trying to compromise between civilization and terrorism, by evenhandedly and neutrally expressing some sympathy for both sides. Compromising with terrorism, murder and anti-semitism, and allowing it some legitimacy and support, is not a neutral policy anymore than being evenhanded about murderers and their victims.

In any case, this is something completely different than the mainstream right wing US position on Israel. A large part of the US population considers stances like this very bad, whereas most of the UK population will either vote for this or, worse, Labour.

Over the next five years, we will put in place stronger protections for our natural landscapes

Since 2009, the EPA has moved forward with expansive regulations that will impose tens of billions of dollars in new costs on American businesses and consumers.

The UK conservatives want more government protections, the Republicans think our government's Environmental Protection Agency is harming business and generally doing too much, not too little.

OK finally let's play a game. You guess which party these come from. All changes in brackets only change a couple words to hide which country it is.

Each year, this system dispenses nearly [large money amount] in taxpayer funds across a maze of approximately 80 programs that are neither coordinated nor effective in solving poverty and lifting up families.

We will support you as you raise your family

We believe that taking care of one’s health is an individual responsibility.

We are set to increase health spending by more than [large money amount] above and beyond inflation in the five years since 2010. And we will continue spend more

We have legislated to ensure that mental and physical health conditions are given equal priority. We will now go further, ensuring that there are therapists in every part of the country providing treatment for those who need it. We are increasing funding for mental health care.

We reject the use of taxation to redistribute income, fund unnecessary or ineffective programs, or foster the crony capitalism that corrupts both politicians and corporations.

We will deliver better public services

We will build new infrastructure in an environmentally-sensitive way

We want to protect our environment for future generations

The environment is getting cleaner and healthier. [...] air and waterways, as a whole, are much healthier than they were just a few decades ago.

Tackling global poverty is both the right thing to do and in [our nation's] interests. We have delivered on our promises to meet the UN target of spending 0.7 per cent of national income as aid and to enshrine this in law.

We support keeping [...] funds from being used in mandatory or universal mental health, psychiatric, or socio-emotional screening programs.

I posted the answers in comments. I hope you can see the difference. All the comments that sound more left-wing are the UK Conservative ones.
Elliot Temple on June 10, 2015

Here are the SPOILERS for the game where you guess which is which.

They alternative, Conservative first, then Republican, back and forth. 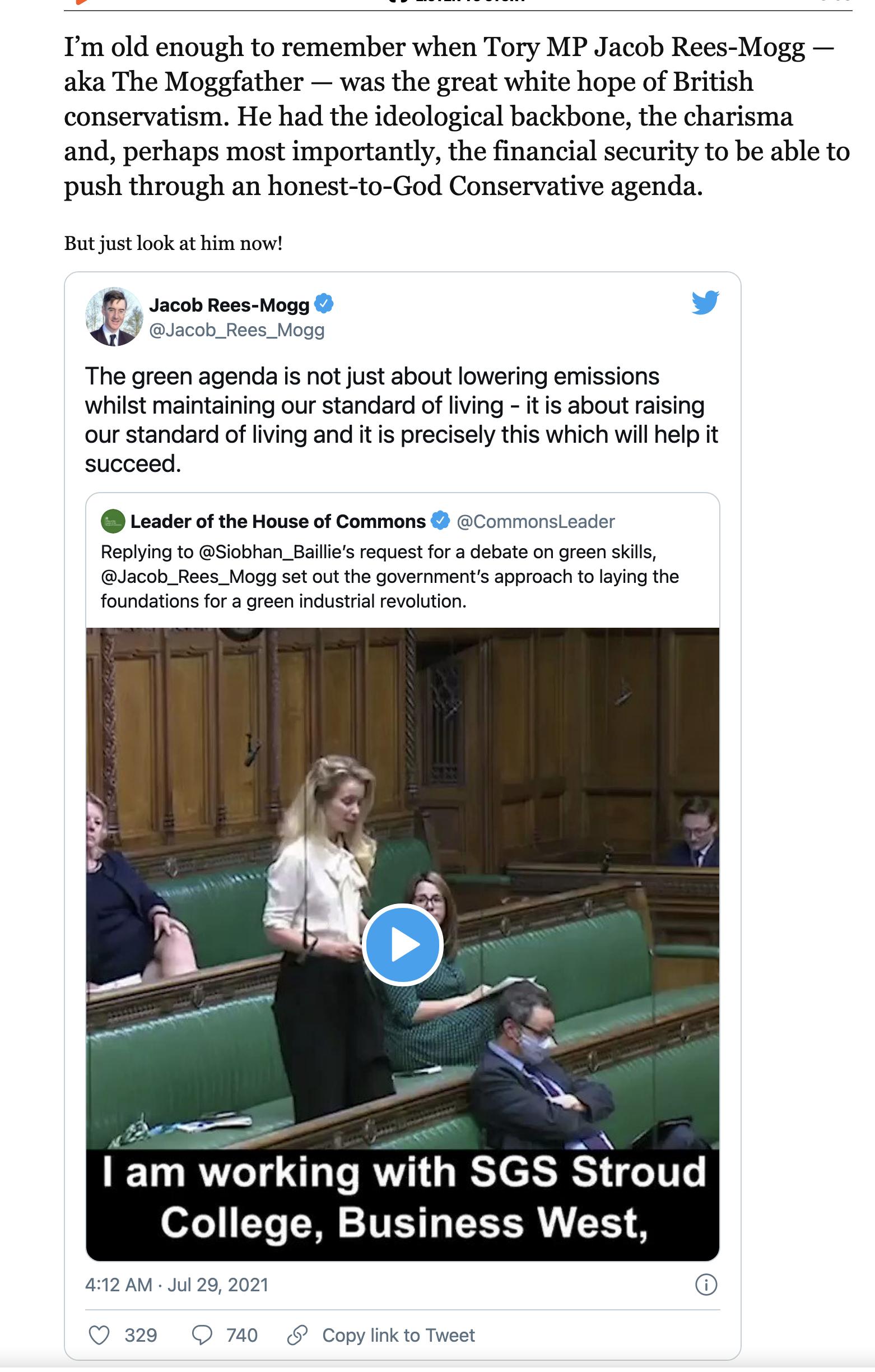