[Previous] Scheduling and Thinking | Home | [Next] The Myth of Teaching 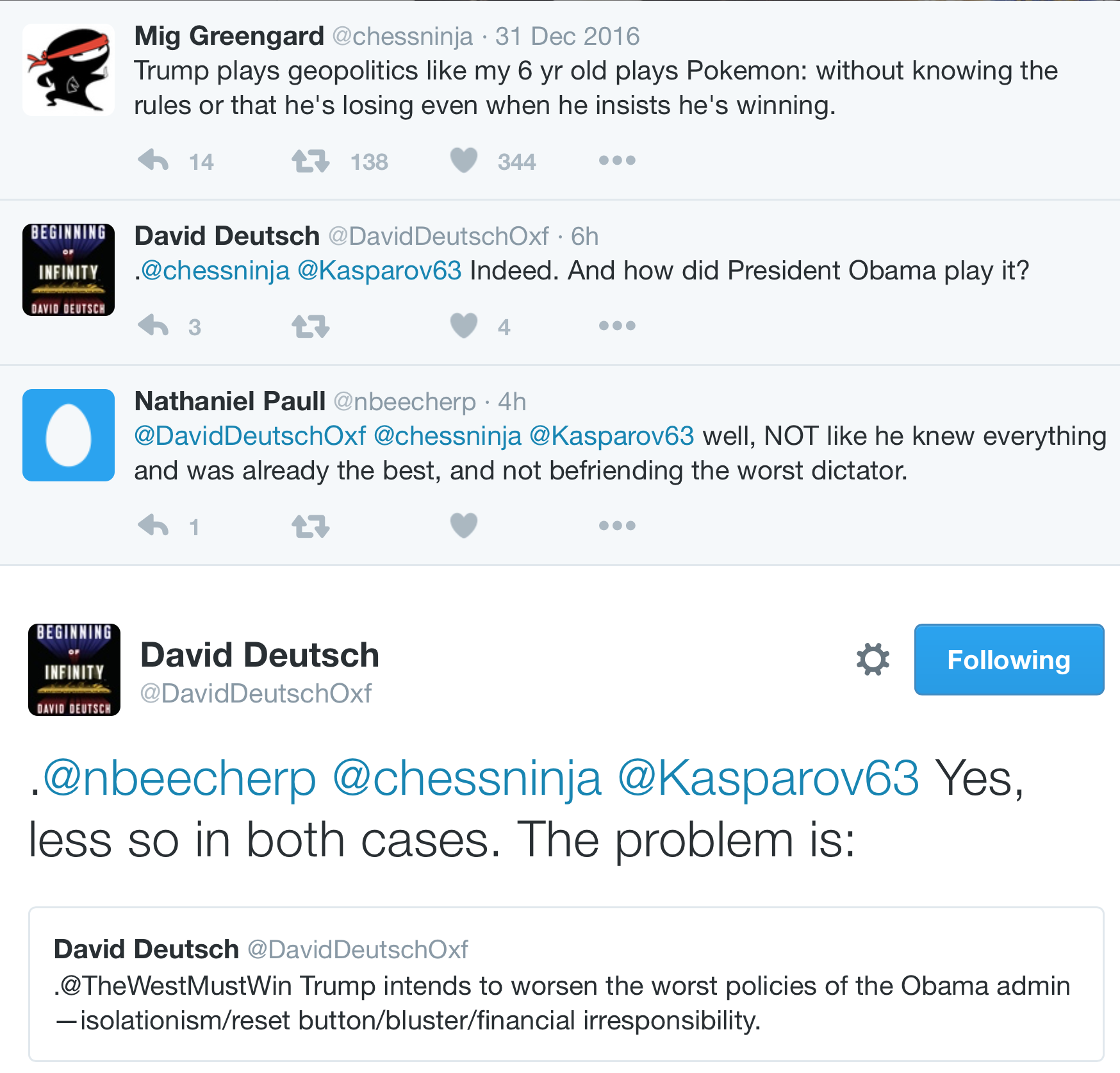 DD is bad now. There's so many things wrong here!

He said "indeed" to a tweet insulting children. Most people would do that, but in the past DD wouldn't have. He was good about ageism.

He said "indeed" to a tweet no one considers literally true.

He said "indeed" to an exaggerated, ageist, unserious, unintellectual claim that Trump is clueless and incompetent. (Also file that under unoriginal!)

He says "yes" that Putin is "the worst dictator" which is false.

DD says "yes" that Trump is "befriending" Putin. That's false. Trump is – as he should – having a working relationship with a person his job requires him to work with. Work relationships are different than friendships. Suggesting that Trump is personal friends with Putin is a lazy smear.

DD not only claims that Trump will pursue all Obama's worst policies, but that Trump is even worse at all of them than Obama. This is unfair to Trump by ignoring many terrible Obama policies where Trump is way better. And it's false because Trump is better on every listed policy than Obama. Trump is going to be more financially irresponsible than Obama? Really? I read Trump's tax plan, among other things, and I don't see it. I await DD's considered argument for this claim and the others. But DD doesn't explain serious arguments anymore, he tweets.

DD has become an apologist for Obama and the left. DD speaks imprecisely and participates in superficial commentary. DD no longer cares much about ageism.

I follow DD's tweets and this quality is typical. He used to be a much better thinker.

Update: Here's a second example of low quality DD tweets. From someone else it'd just be expected that they are confused about AI, persons, animals, etc, all of that. But DD used to be good at these things. And he used to be my peer. But these tweets aren't in my league or up to DD's former standards of thinking. 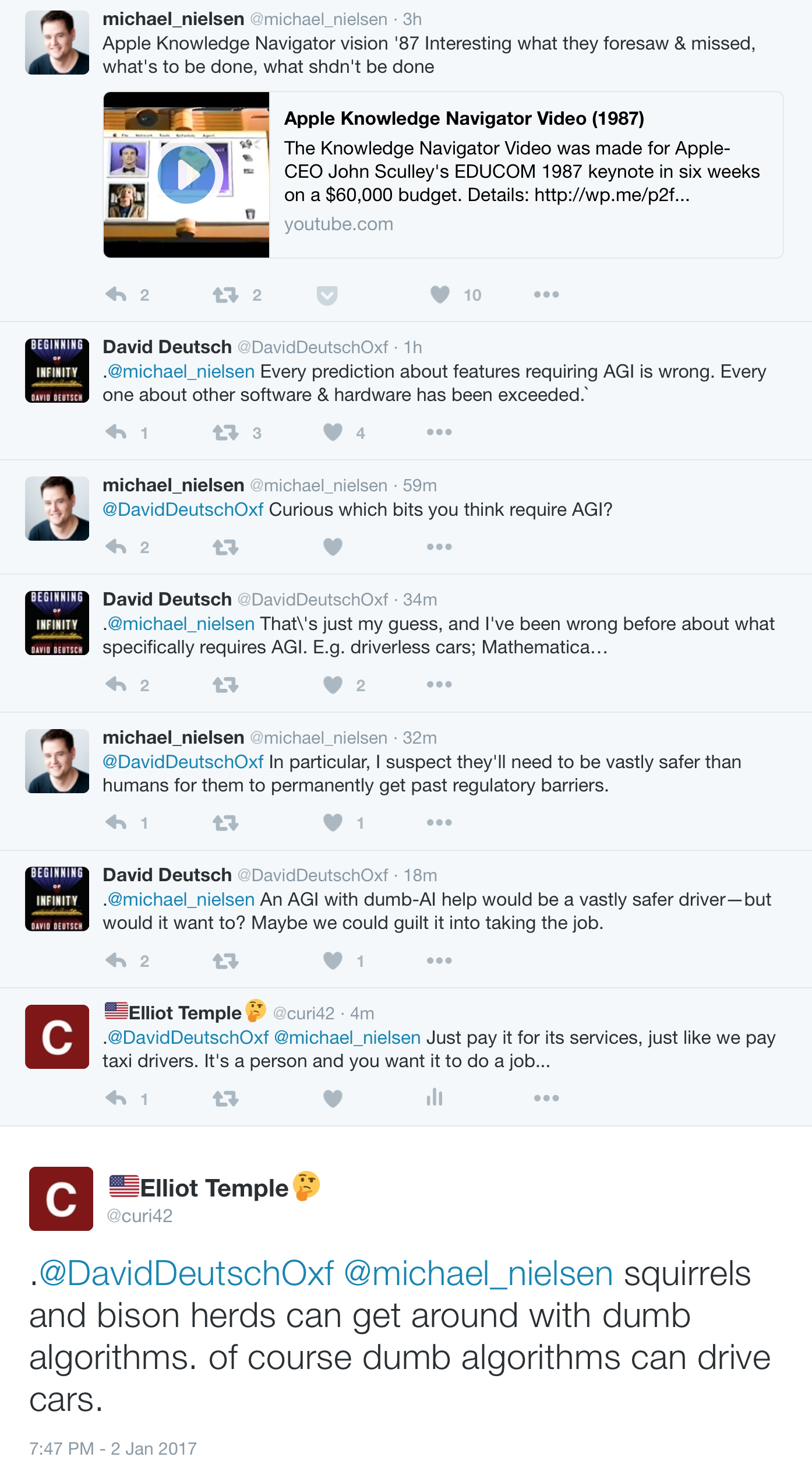 I agree with Michael Nielsen. I'm very disappointed in DD's evaluation of Trump. All of the accusation are - well, false. And I don't understand why. What is wrong with otherwise brilliant people?

DD quit philosophy years ago. Because, in short, the world hates rational thinking and puts massive pressure on people to stop.

I have never seen a person more misunderstood by so many otherwise intelligent people than Donald Trump. Or read more - or more completely, utterly senseless - accusations and commentary about anyone than I see about Trump. It's so pervasive and mind boggling that nobody could summon the energy to take each silly statement to task, unless they're being paid to do it full time.

It must be caused by unrelenting social pressure. I can't find any other reason for this idiocy.

The left is aiming to indoctrinate our children in government schools, dilute the voting pool with anti-American immigrants, and expand government power while being the ones in power. They thought they had practically won already and America was finished, but then people voted for Trump and now a lot of their hard work is being undone. Trump isn't just (partially) undoing some big policies like allying with Iran or Obamacare, also the Democrats in power committed many crimes, like using the government to spy on and oppress political opponents, and their plan for getting away with it was basically to stay in power and never investigate themselves, and now some things are being found out.

The left's response to this situation is to be really mad and double down on the aggression, which makes sense given how the GOP is full of appeasing middle-of-the-roaders who won't stand up for the few good guys like Trump and Cruz.

Meanwhile, no wall is being built and school vouchers aren't getting anywhere (to reduce government control over what children are taught, along with government incompetence/inefficiency to teach anything). Many people don't know it, but Trump made campaign promises about a $130 BILLION voucher program, see: http://www.breitbart.com/2016-presidential-race/2016/11/17/david-horowitz-steve-bannon-civil-rights-hero/

It gets worse. This is Deutsch yesterday:

> The worst thing that President Trump has done so far is to increase the already-absurd amount of hyperbole in political discourse to the level of completely unrestrained automatism.

This was in response to:

> You sold America out to a foreign power, the greatest betrayal of the nation ever.

What the hell is Deutsch doing? The Russian collusion story is utter bollocks and Trump is right it is a witch hunt. Rather than saying this outright, Deutsch just says Trump's worst crime is to cause a complete meltdown in political discourse or something. Trump is not responsible for the left acting like and being complete idiots. He has just helped expose them for what they are.