Twitter is now borderline unusable. Recently a tiny popup on my iPhone let me know they were no longer showing me the most recent tweets of the people I follow. Instead they would show me tweets of their choice. Twitter has a new algorithm where they control what you see. That sounded awful. Although they defaulted me to using the new algorithm, I was able to change back to reverse chronological. I thought everyone was OK.

But I later noticed I was not getting reverse chronological tweets. It turns out Twitter named the new algorithm "Home" and says you periodically get switched back to "Home" – that is, not only did they default-opt-in the new algorithm, they set everyone back to it every few days(?). The text explaining this is intentionally weird and unclear. It means: you can't opt out of the new see-what-Twitter-wants algorithm for long. 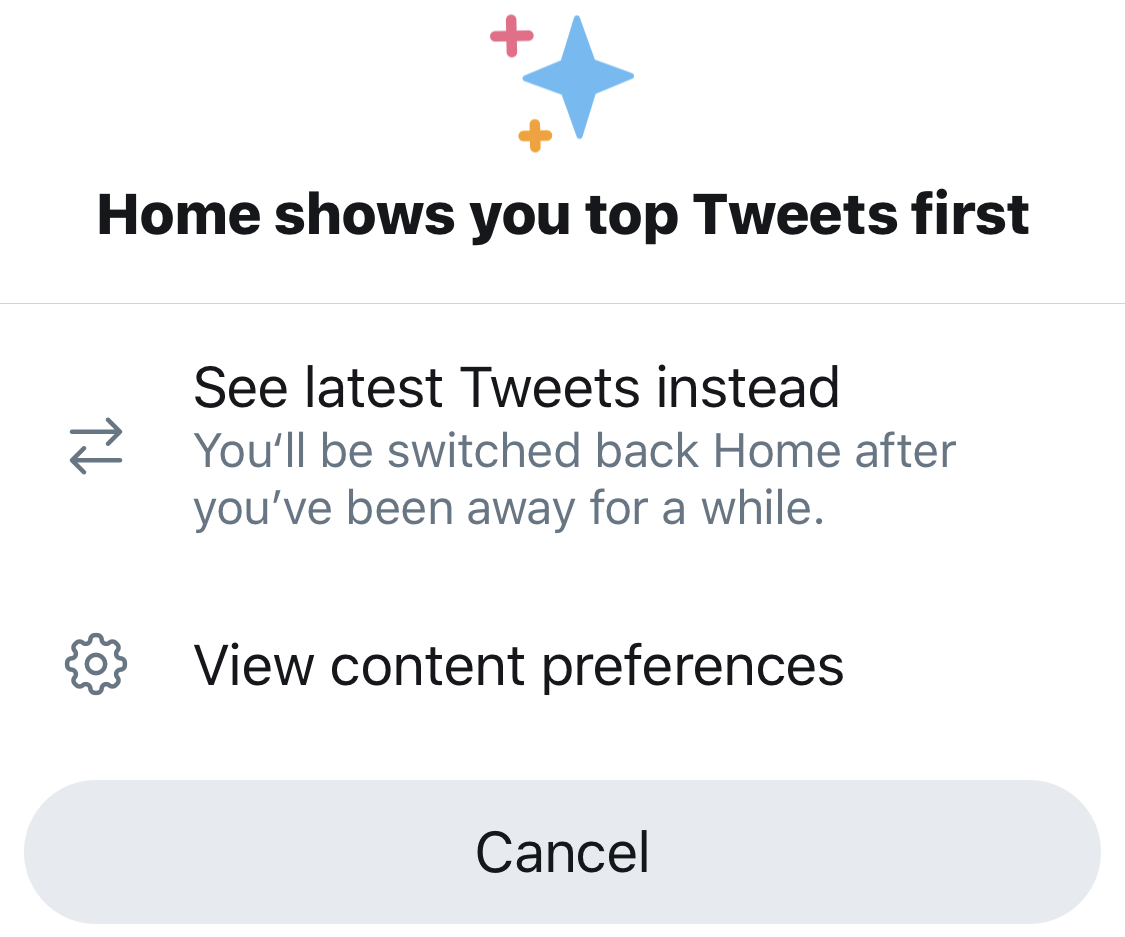 A day or two ago I set my feed back to reverse chronological, again. Today I saw this:

The top tweet is not the kind of thing I want on my feed. I wondered: who do I follow who would retweet that? I might want to unfollow them because we have different tastes. But the answer is: no one.

By happenstance – perhaps this is common with the new algorithm – the other two visible tweets were also ones I didn't want to see. There's another one that wasn't retweeted by anyone I follow. And then there's an ad by Apple (I like their products but I don't like their tweets and don't follow them on Twitter, it says it's a "Promoted" tweet if I scroll down a little past the screenshot).

It's kind of like the people you follow are your Twitter family, and Twitter now shows you tweets from uncles, cousins, and brothers-in-law. But it's not just any tweets from you extended Twitter family you didn't ask for and can't get rid of, it's the ones that biased, left-wing Twitter wants you to see.

What do I do now? I carefully curate who I follow in order to get a decent quality timeline with a high signal-to-noise ratio. Now Twitter has taken that away from me. I can change it back to the "Latest Tweets" setting but Twitter will repeatedly, automatically switch it back again to "Home" aka "show me whatever Twitter prefers I see". It was bad enough when Twitter started showing me an algorithmically-biased selection of tweets that were Liked by someone I follow, but at least that was a choice they made (someone I follow decided to hit a button), even if it wasn't actually the choice to broadcast that tweet. Now maybe I can only follow people who, in addition to tweeting good content, also keep a short, curated follower list which matches my tastes.

I guess I'll get a third party Twitter client even though I don't want any extra features and Twitter has been hostile to alternative clients for years.