[Previous] Autonomy Respecting Relationships | Home | [Next] How To Create Knowledge

All long lived ideas are spread from older persons to younger persons. If that didn't happen, an idea could not outlive the current generation. The future of civilization depends on its knowledge (including traditions, institutions, ideas about a good society, etc...) continuing to exist over time. Consequently, the future depends on which ideas are passed on to younger persons, and in what way. Any civilization which does a bad job of this cannot last but will die off.

For passing on ideas to younger persons, the most important thing is the behavior of parents. Parenting is by far the biggest influence and factor here. Bear in mind that for a child to attend school, his parents choose to send him, and if they behaved otherwise then the child would not attend. (There are exceptions for some countries with laws suppressing that freedom, but they could choose to emigrate instead of comply, so again the behavior of parents is the most important consideration.)

All the major current civilizations do manage to reliably transmit ideas to the next generation. However, there is a second issue: this needs to be done in a way that allows for improvement and progress. Otherwise the civilization will never change for the better and will inevitably die off when some problem comes along that its knowledge cannot handle (like a meteor impact, or even just a tsunami for a civilization stuck with less technology and wealth).

Western civilization is in a mixed state. Improvement and progress are possible, but they are limited and we could do a better job. Better parenting and educational ideas can address this problem, as well as making family life happier.

Imagine a way of life which is perfectly transmitted to the next generation. They will therefore do the same things their parents did, including the same methods of parenting. So they will transmit that same way of life to the next generation, and this will repeat until external circumstances intervene. But no progress will ever happen. This is the nightmare scenario of a static society.

Western society is not static, but most people do parent similar to how their own parents did, in most respects. Unfortunately, that means passing on many mistaken ideas. What would be better is a method of parenting which can pass on good ideas while selectively not passing on any mistaken ideas.

No method can accomplish that perfectly because that would require omniscience. But we can do a better job of it. The most important issue is how disagreements, disputes and conflicts are approached, and whether it is in a rational and truth seeking way or an irrational way that suppresses innovation.

What most parents in the West do is consider what they think is a good or bad idea. If they judge something is bad, they'll try not to teach it to their children. This is a good start which allows for some progress over the generations. However, it has weaknesses. It misses the opportunity for the child to contribute. Parents make mistakes and those will be taught to their children. And, sometimes parents decide an idea is bad but accidentally pass it on to their children anyway.

Parenting and education can be improved by addressing these weaknesses. How can do we that?

Taking Children Seriously (TCS) is an educational and parenting philosophy. Its most distinctive feature is the idea that it is possible and desirable to bring up children entirely without doing things to them against their will, or making them do things against their will, and that they are entitled to the same rights, respect, and control over their lives as adults.

TCS is the only educational philosophy that draws heavily on the correct philosophy of knowledge (explained by Karl Popper). By applying some of the most important existing philosophical knowledge to this area, and finding its implications, TCS provides important insight. TCS is also the only parenting philosophy fully compatible with (classical) liberalism.

TCS has the philosophical answers for addressing the weaknesses.

TCS proposes that family disagreements, disputes and conflicts be approached by finding a common preference -- a way of proceeding which everyone prefers. This is different from a compromise in which the action taken matches no one's preference.

Common preferences are always possible and are a better approach than compromises, sacrifices, or the use of force. A common preference can be thought of as any solution to a problem. Anything else is not a solution but at best a "partial solution" which means some problems are not solved.

Solving problems is good. When they are not solved, people get hurt and suffer.

Let's now return to the issue of passing on ideas to the next generation while correcting mistakes in those ideas, improving them and filtering out bad ideas. Solving problems is one of the elements of how to accomplish this. It is not accomplished by people being hurt or suffering.

It's important that children use their own minds. Children should only accept ideas they are persuaded of, which is the rational approach to thinking. This will help filter out bad ideas.

What sets people apart more is how they handle disagreement. If the parent and child disagree, what happens next? Does the parent force, pressure or manipulate the child to "listen" (obey, believe) as the parent says to? If so, that is irrational. It is not a truth seeking approach. If the parent is mistaken, his idea is passed on anyway, even though the child initially recognized the potential that this particular idea is a mistake. The child's input is ignored in the cases where it's most important because it could correct a parental mistake.

A rational approach which can do a better job of filtering out bad ideas must, in the face of disagreement, judge ideas based on their merits not their sources. It must not be biased against the child's mind in favor of the parent's mind. When there is a conflict it needs to open mindedly seek the truth. That means that the parent and child each may try to persuade each other and explain themselves. They both have a voice.

So, they discuss it. They explain their understanding of the problem at issue, and how it can be solved, and what they see as flaws in the other proposed solutions. And they explain how their solution can be altered to meet any criticism, or why that criticism is itself mistaken. But they still disagree. What next? They can either agree to disagree and drop the issue for now, or try to come up with better, more persuasive ideas.

Although parents know more than their children in general, that has no bearing on the specific case where the child -- knowing that his parent is knowledgeable -- still thinks he knows something important, or his parenting is missing something, about a specific issue. Because parents know more, children will usually agree with their ideas, but in the case of a disagreement then people must not assume the parent is correct. When a parent says, "Because I said so," or, "I know best, so just listen to me," that is the epitome of irrationality.

Especially crucial is that a parent never coerce his child. And it's in disagreements, disputes and conflicts in particular where parents may be tempted, but must instead rely on voluntary, mutual persuasion (just the same as liberalism's approach to disputes between adults).

When a parent fails to rationally persuade, this is exactly the sign we need to identify potentially bad ideas being passed on to the next generation. This is the perfect opportunity to stop trying to pass on the idea and reconsider it, and only to pass it on if the parent can improve it to the child's satisfaction.

The issue of parents accidentally passing on bad ideas can also be ameliorated by never making children do anything against their will. If they are in control of their lives, they can resist picking up ideas they don't want to. So at least in some cases we can get a better result.

Although we cannot have perfection, we can recognize disagreements as places where at least one person is mistaken, and therefore as opportunities for learning, progress and improvement. If a child is mistaken, help him understand better instead of becoming frustrated and coercing him. And the more he resists parental explanations, the more unsure the parent should become, and the more the parent should begin to question the quality of his knowledge on this topic which is either mistaken or not good enough to help the child understand.

Normal parenting and educational practices today are routinely irrational. Parents punish and force their children. They coerce and manipulate. Teachers have curriculums and lesson plans and make it their goal that the child learn and agree with the material; they irrationally expect the material to have no mistakes and not to need improvement (despite the evidence that it has plenty of room for improvement: bored and unhappy children getting test questions wrong or, contrary to the irrational assumption, perhaps disagreeing about some test questions the teacher may have gotten wrong).

The irrationality of forcing children to do things applies to brushing their teeth, attending school, having a bedtime, and everything else that parents might want to make an exception for.

Improvement in this area can change lives and change the world. It's a huge opportunity. Join us and help expand and refine TCS. Learn it yourself and explain it to others.

Spanish Gen Y-ers are suing their parents for financial support

> Under Spanish law, parents are required to support their children until they reach financial independence, with no age limit, and a string of cases in recent years has cemented the rule.

> An adult Spanish woman who sued her divorced dad for a €500 allowance in 2015 was one of several test cases which had the effect of deepening parental responsibilities in the nation, which has the second highest rate of youth unemployment in Europe.

> The man, who had been estranged from his daughter for a decade, refused to support her while she continued her university studies — but was forced to do so by court order, and his bank accounts frozen when he failed to comply, The Telegraph reported.

If you have reached 30 without being able to support yourself, your parents' main failure didn't have much to do with providing money.

Rather, the parents have failed to help you learn about responsibility and how to get your own money. 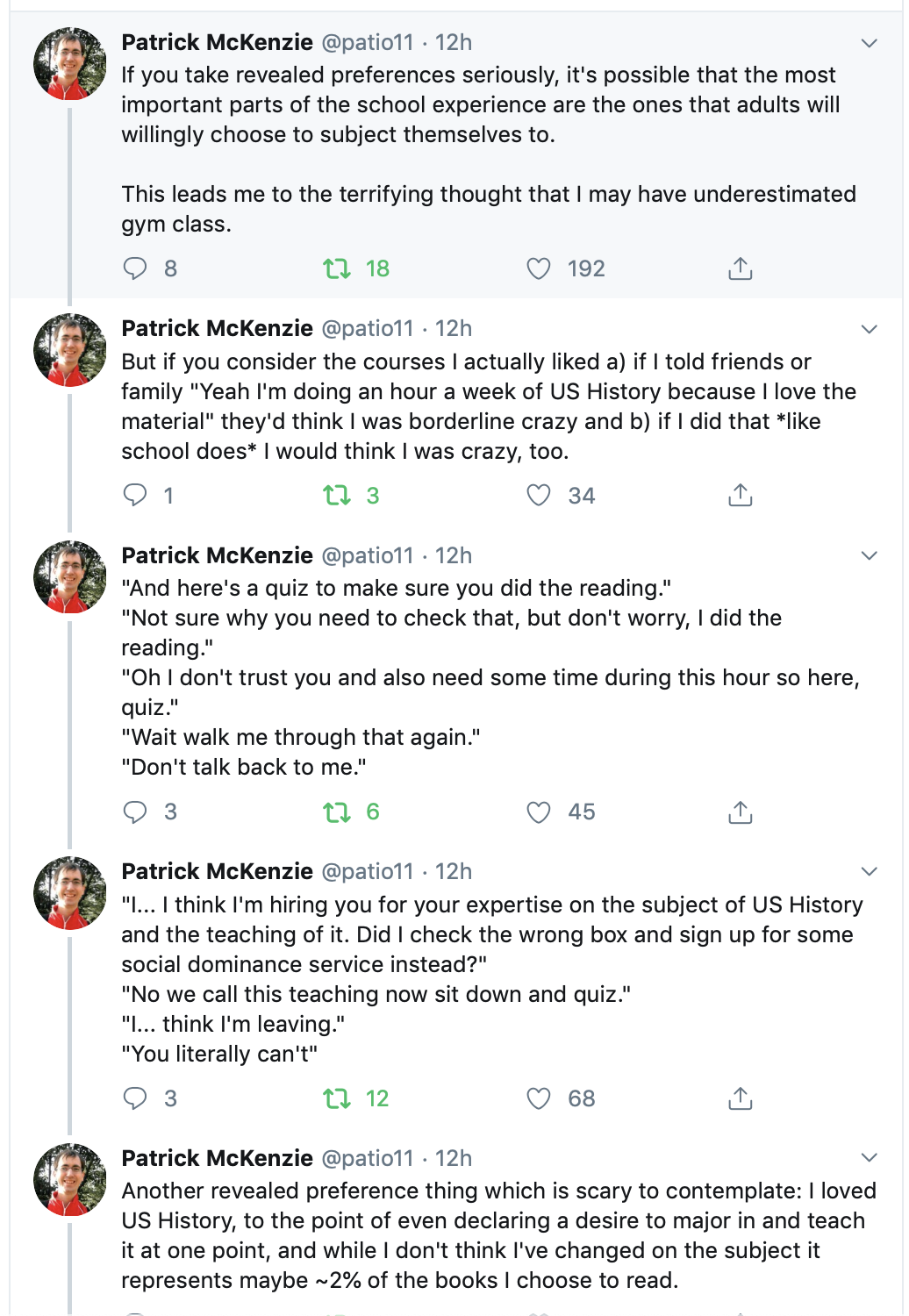 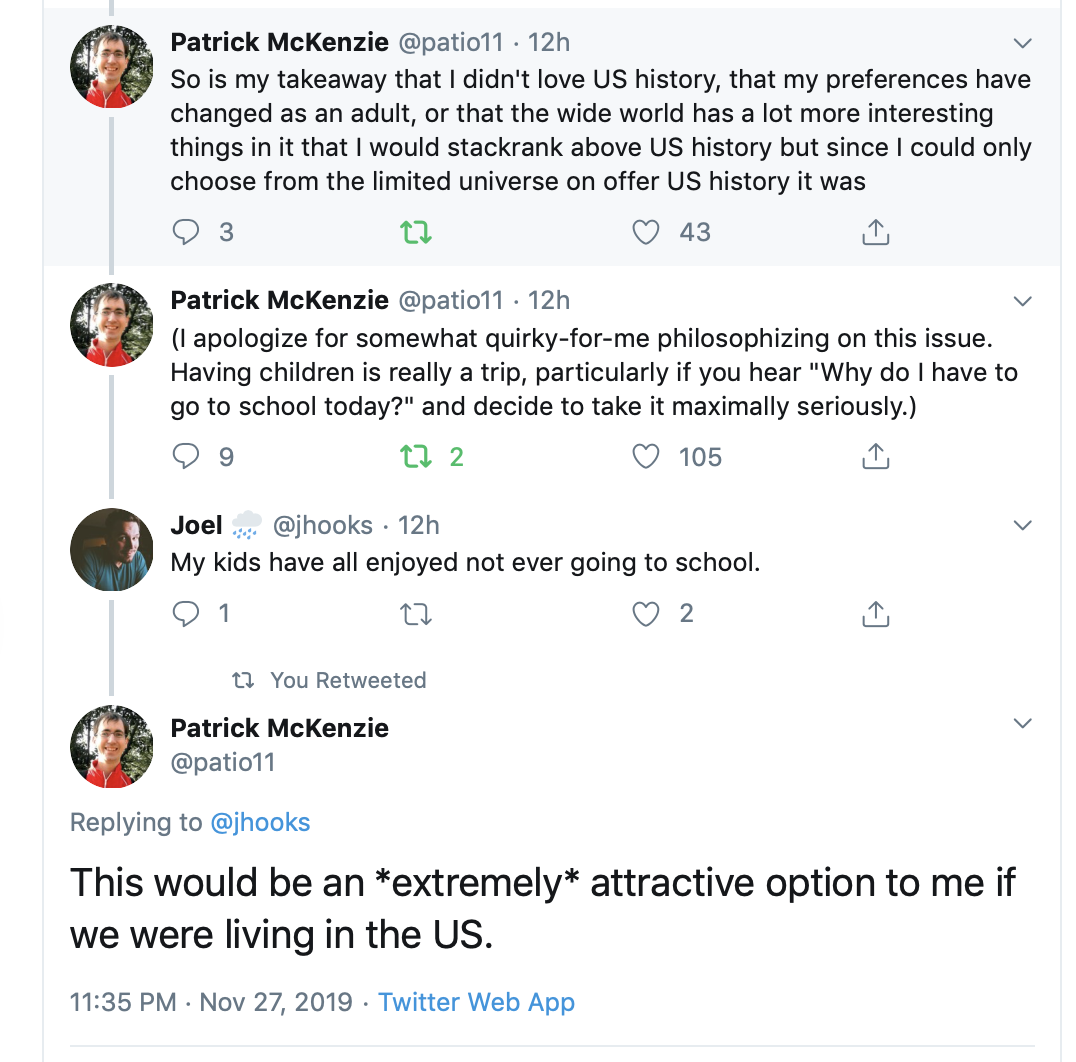 Proposed definition of “common preference” in YESNO terms: a solution to the problem of *what can we do so that all parties get what they want?*