Hacker News pretends to be a social news site where the users decide which news stories reach the front page with their votes. This is a lie.

Today, Apple had its quarterly earnings call. This is interesting news, and there were a bunch of articles about it. What did I find on the Hacker News front page about it? Nothing. So I clicked through and found Apple's press release at story #95: 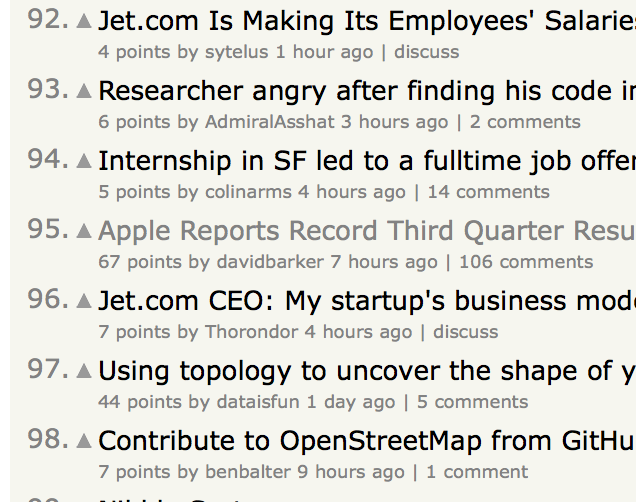 You can see the amount of votes, and the age, of the other stories near Apple's earnings. Apple's story was heavily penalized so that far fewer people would see it. Hacker News moderators have the attitude that penalizing stories isn't censorship, and is not that big a deal, even though it makes a large difference in what links most readers see. (Most people only ever see the top 30 stories.)

For a comparison, at the same time, here is the #10 story which had fewer up votes than Apple's earnings report, while also being older. The Apple story should have easily been in the top 10, not #95 (and if it had been on the front page longer, it'd have gotten a lot more up votes). Meanwhile all the other articles about Apple's earnings were blocked from the site (or penalized out of the top 120 that I checked).

I don't think most Hacker News readers have any idea how much the stories they see are controlled behind the scenes, rather than controlled by user voting.

(Yes, I'm aware this could have been done by a behind the scenes algorithm, rather than personally done by a human moderator. The human moderators are not shy about doing this kind of thing, but they do also have algorithms which do unexpected things such as penalize stories with a lot of discussion in comments (the rationale is to reduce debate/argument, in hopes of raising quality). And Hacker News uses flags as stealth down votes with extra weight.)
Elliot Temple on July 21, 2015