Now this is a hard one, because when it comes to immigration, you know that the 11 million illegals, even if given the right to vote. You know you're going to have to do what's right. But the fact is 11 million people will be voting Democratic. You can be out front, you can be the spearhead, you can do whatever you want to do, but every one of those 11 million people will be voting Democratic. It's just the way it works, and you have to be very, very careful, because you could say, that to a certain extent, the odds aren't looking so great right now for Republicans, that you're on a suicide mission. You're just not going to get those votes. [emphasis added]

What Trump said is:

Why is it right to give illegal aliens the right to vote in America? Are we a country of laws, or not? This isn't just some kind of legal resident status (which would be bad enough), Trump is saying we have to give every illegal full citizenship including voting. No we don't have to do that! No that's not right!

I'm not surprised that Trump is a squishy leftist.

I already knew Trump favors eminent domain, doesn't like guns, is pro-choice, has New York values, sympathizes with social justice warriors, and isn't very religious. I knew Trump favors big government healthcare because he has a "heart". And Trump favored taking in Syrian refugees, and funding Planned Parenthood, before changing his position.

I already knew Trump doesn't want to cutback on Social Security and Medicare. His ridiculous entitlements plan (that he advocated at CPAC 2013 and 2014, not just on the campaign trail today) is no reforms or cutbacks, just grow the economy and don't worry about spending. Trump is not a small government kinda guy.

I already knew Trump had praised Hillary Clinton, Harry Reid, Nancy Pelosi and Al Sharpton. I already knew he was involved with some of the worst leftists. I already knew thinks he can make deals with the left as President, instead of standing up to the Washington Cartel.

I already knew that Trump was squishy as hell on Free Speech – when Muslim terrorists attacked a free speech event in Texas, Trump questioned why people say offensive things that "taunt" Islamofascists.

What surprises me is that Ann Coulter praised Trump's 2013 CPAC speech and cited it as evidence that Trump has a previous history of being good on immigration: 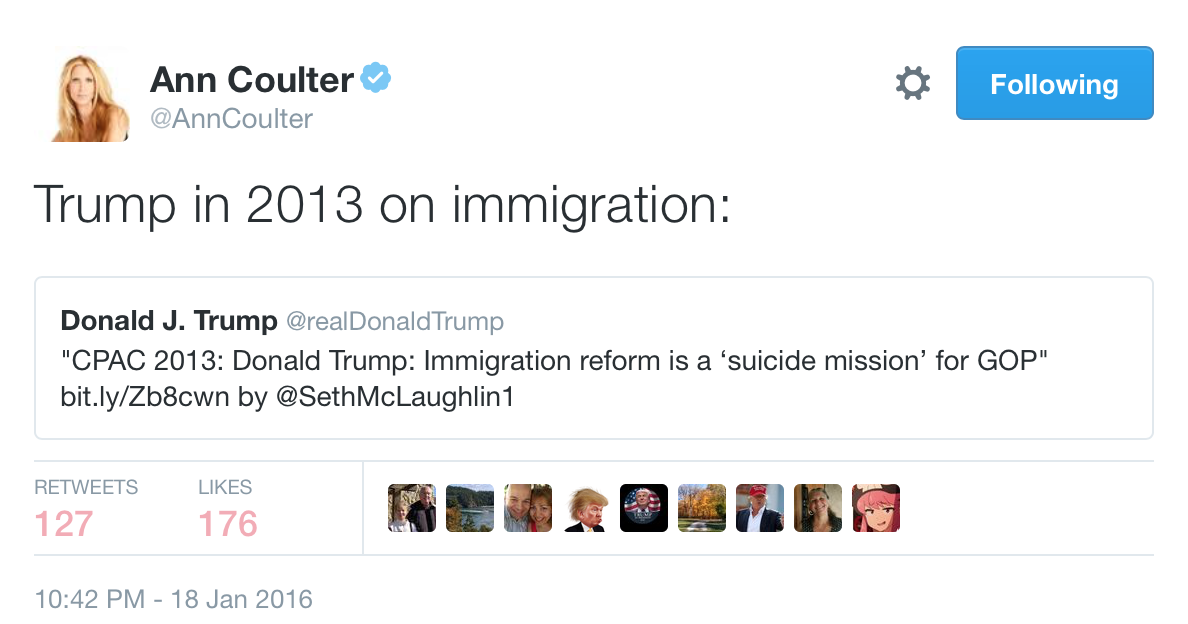 The assumption Ann's readers will make is that Trump is against suicide. Nope. Trump was demanding suicide!

How can Ann take a speech where Trump advocates giving every illegal alien the right to vote in US elections – even though he thinks this will destroy the Republican party – and then tell us to support Trump (as a Republican!) because he's great on immigration? Why is Ann covering for Trump on the one issue she cares about?

Ann told us that Trump was the one guy joined her in opposing immigration in CPAC 2014.

When you let the 11 million — which will grow to 30 million people — in, I don't care who stands up, whether it's Marco Rubio, and talks about letting everybody in, you won't get one vote. Every one of those votes goes to the Democrats. You have to do what's right; it's not about the votes necessarily. But of those 11 million potential voters which will go to 30 million in a not too long future, you will not get any of those votes no matter what you do, no matter how nice you are, no matter how soft you are, no matter how many times you say 'rip down the fence and let everybody in' you're not going to get the votes. So with immigration, you better be smart and you better be tough, and they're taking your jobs, and you better be careful. You better be careful. [emphasis added]

I support Ted Cruz who has wanted to build a wall since at least 2012. Cruz, besides being better than Trump on individual issue after issue, is smarter and more principled. Cruz favors free markets, limited government, and liberty in a way Donald Trump doesn't understand.