Animal Welfare and The Problem of Design

This is an answer to Name That Trait which asks what trait differentiates humans from animals. The named trait should justify vegan-objectionable activities such as slaughtering animals for food.

Short answer: the trait is being a universal knowledge creator. This answer relies on lots of non-standard background knowledge such as The Beginning of Infinity.

This post gives a different argument which I think is easier to understand with less background knowledge. It will still require going over some background.

The Problem of Design

An important problem in the history of philosophy is the problem of design, famously argued by William Paley. It says some objects (such as an animal or pocket watch) have the appearance of design which requires explanation. Paley’s explanation was that a pocket watch has an intelligent, human designer, and animals were designed by God.

Plants, animals and pocket watches have the appearance of design. They’re complex. Stones, crystals, dirt and stars don’t. This is a big difference. Stones and stars are worth explaining in terms of fundamental physics like the big bang, but plants merit additional explanation. Plants e.g. have chloroplasts which do photosynthesis, which are nothing like rocks and wouldn’t be created randomly or purposelessly.

The above is widely accepted. What’s not widely known is that “appearance of design” is knowledge. Knowledge is information adapted to a purpose.

The underlying problem is how knowledge can be created starting with non-knowledge. Where can new knowledge come from? How can it originate?

A single good answer has been developed. It’s the only known answer that makes much sense. It’s the theory of evolution. Replication with variation and selection is able to adapt information to a purpose and thereby create new knowledge. The appearance of design, in plants and animals, was created by evolution.

Where did eyes come from? Evolution. Why does a rabbit run away from danger? It evolved to do that. Why are trees structured in an organized way with the leaves on top where they can better receive light? Because that structure has better survival and replication value for trees (survival and replication value is the short answer for what biological evolution selects for). Etc. This is widely accepted.

With this background in mind:

How does intelligence work and create new knowledge? I believe intelligence works by evolution, literally, not as an analogy. (Seriously I find that 90% of people assume I mean an analogy even though I just told them I didn’t.) This is not a mainstream view. It’s been developed by Critical Rationalist philosophers, especially David Deutsch.

FYI, the view that evolution applies to replicators is a fairly standard view in the field even though most of the public is ignorant of it. It’s held by e.g. Richard Dawkins and is why he developed the idea of a “meme” (which means an idea that replicates). A meme plays the role in the evolution of ideas that a gene plays in the evolution of plants and animals.

Human behavior also has the appearance of design, so what’s the difference? Humans create new knowledge that isn’t in their genes. Instead of relying only on biological evolution for knowledge, humans do intelligent evolution of ideas within their minds. This is a capacity that no animal has and explains why only humans were able to invent philosophy and science.

People commonly assume that the appearance of design in animal behavior is an indicator of intelligence, while the appearance of design in an animal’s eyes and claws is not. The primary mechanism by which genes control animal behavior is through creating the animal’s brain according to a design detailed in the animal’s genes. The animal brain is a computer which the genes build and configure with behavioral algorithms. Humans work differently because they’re capable of doing evolution within their minds to create new algorithms, new behaviors, new ideas. etc.

Getting from these claims to a full case against animal welfare or rights requires additional arguments. I won’t detail them here but see this post for some explanation. The basic issue is that animals aren’t differentiated from rocks in a relevant way because genes (which are where the knowledge is) are not conscious and can’t suffer (like rocks), and animals behave according to algorithms in conceptually the same way as a robot like a self-driving car.

For more info, see e.g. Evolution and Knowledge, Evolution, and the books of David Deutsch and Richard Dawkins.

Related: There was a voice debate between Justin, TheRat, Avi, Nicole and Lovey2 (transcript) on Avi’s Discord server. Avi is a vegan and medical doctor with nutrition expertise who is friends with Ask Yourself, a vegan YouTube debater who popularized Name That Trait.

Note: The standard way people think about memes is replicating between people, from mind to mind. What I'm talking about is memetic evolution within one mind.

Shadow Starshine, who made some videos critical of AY, joined the FI discord today and we're chatting atm. 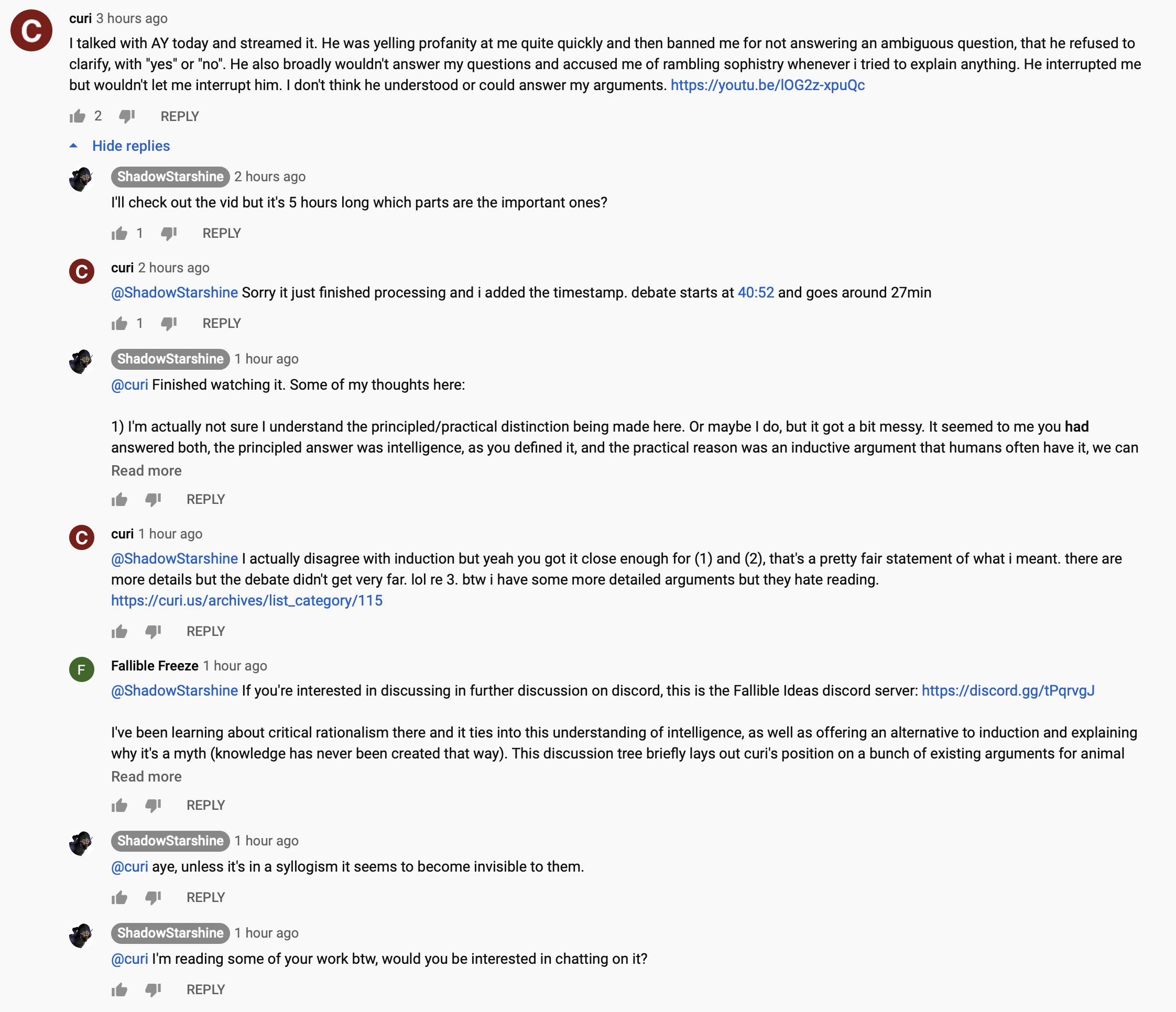 I debated Ask Yourself and Bryn on voice chat. Got banned in under 30min.

Ask Yourself uploaded it too:

On his video, someone posted the following comment which AY or one of his moderators quickly deleted, apparently b/c it disagreed with AY too much: 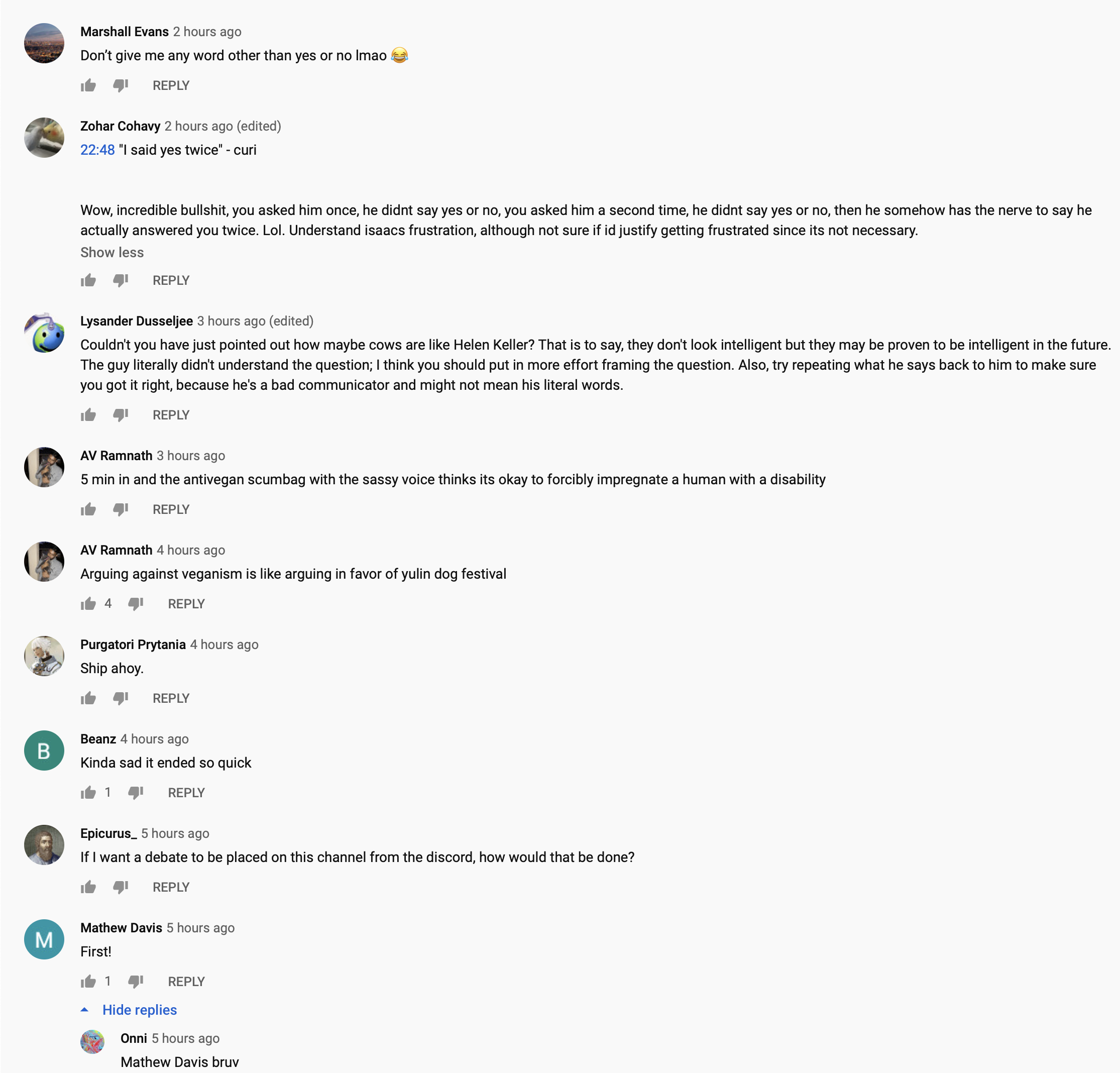 I'm also informed that Andy B sent a Twitter direct message to Ask Yourself asking if he knew comments were being deleted on his videos, and Ask Yourself replied calling Andy an absolute moron.

I think you're right. Some questions: How large a population of candidate ideas would we need for this to be viable? And on what timescales? How do slow neurons support this? How do brains do all that computation and still use less than 25W?

I don't know much about power consumption of computation, though in my understanding, PCs use far, far more power than is theoretically possible, so maybe brains are way more efficient.

I also don't know re hardware details about *slow* neurons.

I couldn't give you numbers for how many ideas but I think it's a big number.

There are indications that genetic evolution is a much better computer programmer than we currently are. IIRC the part of the human genome that differs from animals is only like 2 megabytes of data. Even given some good library functions available from the other genes, 2 megabytes seems like quite a low amount to specify intelligence with. (And some of those 2 megs has to go to other differences in humans.) That seems quite compact compared to what programmers today write. For people curious about this, I suggest taking a look through your applications folder. For example, TextEdit is 5.6 megs, Safari is 25.9, Chrome is 442, FineReader (OCR) is 1024.

> IIRC the part of the human genome that differs from animals is only like 2 megabytes of data. Even given some good library functions available from the other genes, 2 megabytes seems like quite a low amount to specify intelligence with.

The jump to universality that brought about intelligence in our pre-sapien ancestors was a small evolutionary change. So we shouldn't expect a large difference between us and our non-intelligent ancestors. Most of what is needed for intelligence is already in their genome but it is being used for some certain type of specialized algorithm. It was ready to jump to universality given the right change.

#14834 I think there's a decent sized evolutionary gap between any other animal and intelligence, or else some others would have probably evolved intelligence.

> @curi Finished watching it. Some of my thoughts here:

> 1) I'm actually not sure I understand the principled/practical distinction being made here. Or maybe I do, but it got a bit messy. It seemed to me you had answered both, the principled answer was intelligence, as you defined it, and the practical reason was an inductive argument that humans often have it, we can be wrong about it despite behavioral assumptions, therefore it's a moral hazard.

> 2) I'm not sure I even understand how they were going about disputing the inductive argument. You are abstracting from a set of data (most humans) possible properties of other humans. Essentially genes in humans often give rise to intelligence, intelligence is often known by language. (But, apparently, I assume in your view, not a necessary component but a proving factor). So you have more reason to suspect that a human without the proving factor can have the property than a species with no proving factor. I'm not sure why Bryn found that overly complicated. I'd personally have my own disagreements, but, I just don't understand the nature of theirs.

> 3) I laughed when you muted AY. I'm pretty sure they just wanted you to concede something so they feel better, I don't think what you had said was overly confusing and they were making it more confusing for no good reason.

The 2Mb difference you were talking about is not between us and *any* other animal is it? I was thinking it was our difference with chimpanzees or suchlike.

Couldn't find a source for the 2 Mb difference. Just did some quick searching and, from what I read, our DNA most closely resembles the DNA of chimps and bonobos. Studies from the early 2000s reported a difference of 1% to 2% but it looks like some studies have revised that upwards recently to between 4% and 5%. Apparently, there are tiny differences all over the genome but they are mostly to do with DNA in the gaps between genes rather than with the genes themselves. Some papers are saying this gap-DNA was once thought to be junk DNA but it is now thought to govern how genes are expressed (turned on or off). So although our genes are nearly the same the way they are expressed can be different. One paper is saying the differences are about 90 Mb.

#14852 Thanks. Still a low amount compared to the size of Finereader.

And yeah the difference would be with chimps but i don't think chimps today would be super close to intelligence, it has to do a decent amount of stuff that's hard to evolve.

> And yeah the difference would be with chimps but i don't think chimps today would be super close to intelligence, it has to do a decent amount of stuff that's hard to evolve.