[Previous] Achieving Mastery When Learning, Plus Followups | Home | [Next] Google Is Culturally Racist

Learning, progress or achieving a goal requires organized effort. That means it's not random, aimless, chaos.

For example, the scientific method organizes thinking and action so that scientists learn about nature. It's known for being particularly organized and for being much more effective than less organized approaches generally are.

There are many sources of organization. Following the scientific method is one way that your effort/actions may become organized.

If no sources of organization are used, learning will fail. No organization = chaos = no learning. You must have something to reduce chaos – to bring order to chaos – or you'll fail. (Getting lucky can work when you have some organization but not enough. It doesn’t work with no organization.)

Often, people aren't aware of where organization comes from. They don't know they're using organization, but what they do is far from pure chaos. They think of it as unplanned, freeform learning, but some forces causes it to be significantly organized.

We’ve been discussing this at my Basecamp group. Below I answer the question and explain why it matters.

Where Organization Comes From

All knowledge comes from evolution.

There are two known types of evolution:

These broad sources of organization can be broken down into sub-categories, e.g. all evolution of ideas fits into two categories:

And that can be further broken down, e.g. splitting up my ideas:

We can take the intuitive ideas and sub-categorize further, e.g. by an idea’s age. E.g. the idea is from childhood, is from young adulthood, or it’s recent. 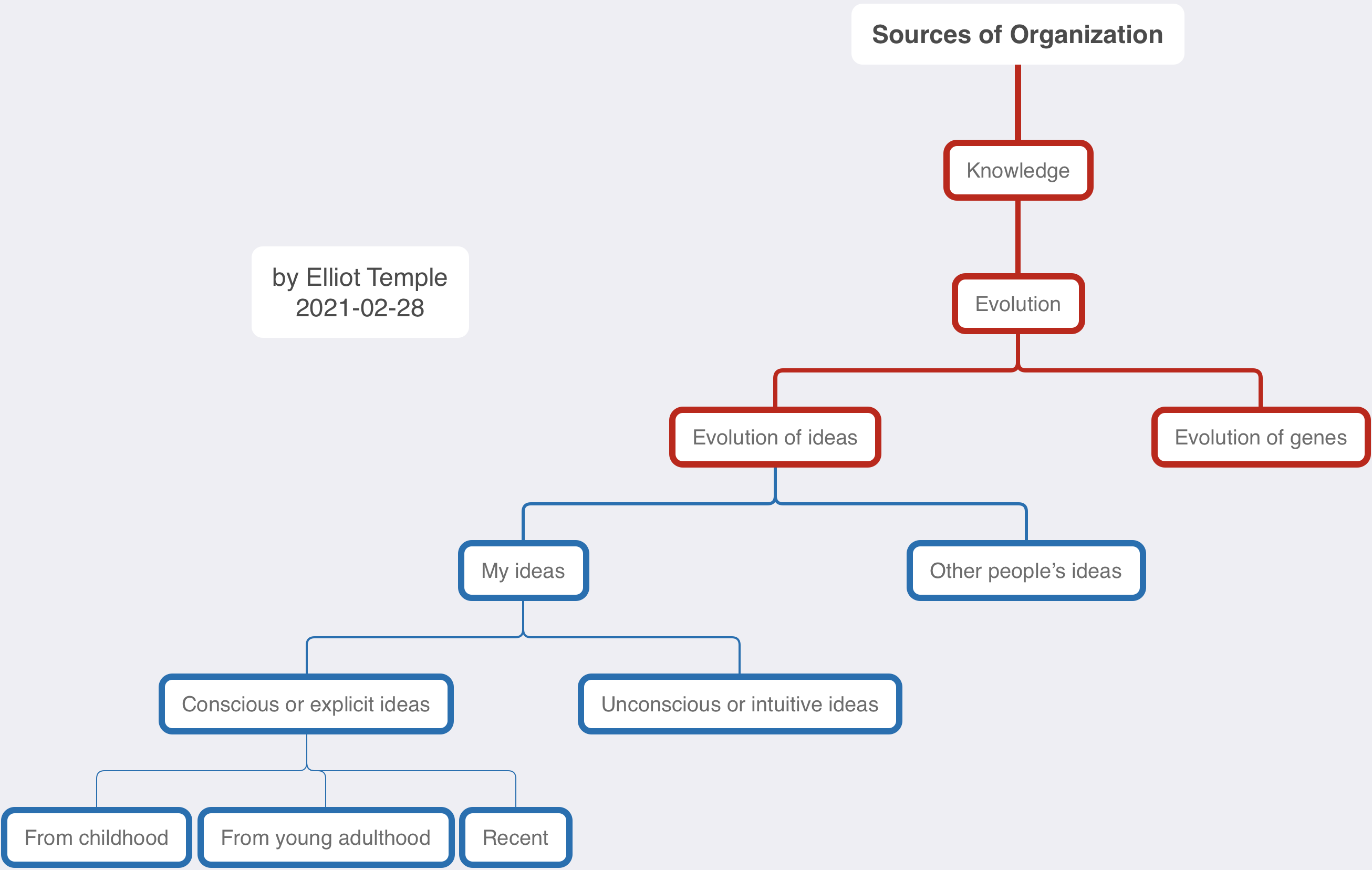 The red part of the diagram is more thorough and the blue part less. All organization is due to knowledge. All knowledge is created by evolution. That part is 100% complete (according to the best available understanding). There are no other options being left out of the diagram. Evolution could work with other replicators besides ideas or genes, but ideas and genes are the only known replicators that have created significant knowledge. By contrast, the categorizations in blue are more fuzzy. E.g. other people can’t literally put ideas in my head – they can say words but then I use my own brain to think about and understand it. So in some sense, I personally create every idea in my head. But it’s still meaningful to say that I thought of one idea myself and learned another idea from Joe.

Try adding more to the chart yourself. You can take any node (box) and break it down into categories. And they don’t have to be perfect to be useful. E.g. genetic evolution could be imperfectly broken down into plants, animals, fungi and bacteria.

When you do a project, if you want results that are better than convention – if you want to improve on your society/culture – then you need organization/knowledge coming from a source other than convention. That basically means you can’t rely on your intuitions or someone else’s intuitions. You can’t just do what seems good, because how stuff seems to you was developed in childhood and largely fits with convention.

What Organizes Your Project? Are You the Sucker?

You should think about where the knowledge is coming from when you do a project like trying to learn something, especially if you want great results of some sort instead of just typical results.

If you can’t figure out where the knowledge or organization for a project is coming from, expect conventional results at best. You’re the sucker (or puppet or pawn) for some force you aren’t aware of – most often the static memes of convention, but sometimes something else, e.g. a conman, cult, or political movement. Plus, expect some disorganization/chaos too. If the organization isn’t clear to you, your project is only going to be partially organized.

This is like the poker advice: If you can’t figure out who the sucker at the table is, it’s you. With life, if you don’t know what’s going on and what’s controlling outcomes (in other words, what is organizing events), it’s not you – someone or something else is in control (plus there’s some disorganization/chaos). You’re the sucker. You’re the NPC, not the protagonist or hero of the story.

One source of knowledge is doing project planning steps. You can organize your project yourself using conscious thought. You can brainstorm. You can consider resources, goals, steps, risks, prerequisites. You can write things down.

If you don’t do conscious, explicit project planning, you need to have an idea of what you’re using instead that will work, or else have really low expectations.

An alternative source of knowledge, rather than organizing things yourself, is a curriculum that someone else makes and you buy. Or, similarly, a tutorial you find online. In that case, someone else put conscious thought into organizing the project. So you’re using their thought instead of your own. But at least you have an idea of where the organization is coming from and what the goals of the organizer are (e.g. they may care about their reputation as an educator and about getting repeat customers, so you may reasonably judge that using you as a sucker isn’t their goal).

There are some risks using someone else’s tutorial (but it’s still a worthwhile strategy that you should use sometimes):

One strategy that helps with these problems is learning from multiple other people simultaneously. You can get 5 books by 5 different authors and look at how they organize and explain things, and mix and match pieces of knowledge from different books that you think are good and are compatible with you. Often you’ll find some parts of a book are low quality or are incompatible with you, but some other parts are useful. And if you take the useful parts from many books, plus figure out some additional stuff with your own thought to fill in the gaps, that’s often way easier than figuring everything out yourself even though none of the books are great.

When you use a strategy of finding 5 books from 5 others, reviewing them all, comparing them, etc, you are doing a bunch of organization of your learning project. You’re taking lots of control, using your own judgment in key areas, and you get more credit or blame for the outcome. Whereas if you just follow one author’s plan, and try to do and believe whatever he says, then you don’t have a leadership role in the learning project and have less responsibility for the outcome. (But it’s your life, so you have to live with the outcome. Handing off responsibility and trusting in the leadership of others is something to be very careful with, especially as an adult.)

Organization and knowledge are close to synonyms. ‘Organize’ means “to form into a whole consisting of interdependent parts”. Knowledge is a whole made of parts (ideas, which generally have some dependence on each other). Organizing makes parts work together for a purpose or goal, as ideas work together to solve a problem (or, same things, accomplish a goal or achieve a purpose).

The root word of ‘organize’ is ‘organ’ and one of its historical meanings was 'that which performs some function’ (in other words, a purposeful, goal-directed thing – which is what knowledge is).

The history and typical way of thinking about ‘knowledge’ or ‘to know’ is different than this, but the correct understanding is similar to organization. Like “adaptation to a purpose” is a non-standard but good take on knowledge, and “organization for a purpose” is very similar. (Note: with both “adaptation” and “organization” the words “for a purpose” are actually redundant – a purpose is implied/assumed/included with the main word. The redundancy helps with clarity and emphasis.) How do you organize something for a purpose? You change it to make it fit that purpose. That’s what adapting means: change to fit a (new or different) purpose. ‘Adapt’ also sounds like the cause is evolution, but the cause of human organization is evolution too: people organize using their ideas, and they get those ideas from their intelligence which works literally by evolution.

I made slides with more about sources of organization. PDF or SlideShare.

I liked this and it helped (and is helping) me. I've shared it with some people that I think it could help, too.

One of the problems with school is its hostility to multi-source learning. They want you to believe whatever the one teacher and one textbook say. (Sometimes multiple teachers or textbooks are used, but they're normally chosen to agree with each other, not to provide differing views.)

If you get 10 books on the subject and pick and choose which parts to believe or pay attention to from which books, the teacher won't be happy (especially if you ever try to correct him using info you got in a different book) and you will be graded poorly on some test questions since you have different ideas than the answer key.

Schools teach people to learn from one authoritative viewpoint, not to use judgment.