[Previous] Globalism | Home | [Next] The Greeks Knew We All Make Mistakes

From VDare: 93% Of Democrats Think It's Important That Fewer Whites Be Elected.

The article leads with a chart, which says that 75.1% of Democrats believe that "Whites are favored". The chart repeats later in the article. Problems:

The chart was brought to my attention by khaaan on Twitter, who questioned its sourcing.

1. and 2. Yes it does. It's provided in the body of the post. In the interest of my readers' time, I don't link to the same source multiple times in the course of a single post. I've been doing this for a long time and have a well-deserved reputation for being meticulous with my source data.

3. Almost nobody wants to see the figures presented worked out. It's a blog post, not a research paper (though most people who read research papers also skip over the parts where authors show their work.

Literally every single complaint you made, publicly, to try and grab a little attention for yourself was invalid. You're not doing VDare or our movement any favors with ignorant concern trolling.

I'm a lot better at this than you are--that's fine, I've been doing it for a long time--so if you have concerns you should attempt to have them addressed privately via DM. There are organizations like the SPLC and the ADL who love having useful idiots like yourself blow smoke for them. They use it to create the vague perception that VDare cannot be trusted. It can be.

If a book has a chart on page 54 with no source in that chapter, but on page 33 there is an unrelated comment with a source which happens to be the same source from the page 54 chart ... is that reasonable? Is the chart sourced? No. There is nothing saying what the source for the chart is.

Re 3, if people don't want to see something, that is what footnotes are for. ez.

By being so sloppy and then refusing to correct your errors, you are helping SPLC and ADL. You are making the lefty "fact checkers" partially correct when they attack sites like VDare.

AE, regarding point 3, you could use a footnote. Doesn't have to be in the body.

It's important to show your original work in order to get mistakes corrected, which is something your *best* readers might help with.

Regarding SPLC etc, it is helpful to them if their opposition offers low quality scholarship that is easily refutable. The way to avoid this is by using good methods like being rigorous, showing your work and properly documenting sources. You don't seem to be a big fan of this approach, and are thus yourself (unwittingly) the left's handmaiden.

Finally, having a strong spirit of frank public criticism is good. Why should we limit our criticisms of scholarship to DM like fragile snowflakes? Doesn't VDare like spirited exchanges of ideas like at the Mencken conference or whatever? The left is gonna be vicious regardless - whispering our disagreements won't appease them.

I'm not curi, and I like VDare in general, but can't say I'm impressed with your response here pal.

So here's the math with ruby:

Let's sanity check that. What does the naive method get?

Ok and what about the top end of the range?

So there is a range of 239 different numbers of individual respondents that CNN would have reported as it did. Audacious Epigone is factually and mathematically wrong.

I leave it as an exercise for the reader to correctly calculate the possible total numbers of dems who responded to the poll and to then figure out maximum and minimum percentages of dems who think whites are favored, and then see if the answers are all in the range 75.05% to 75.15% that could be correctly represented as 75.1%, or not. (Based on estimating it, I will be happy to bet money on *not*).

PS I know this depends on rounding rules. I assumed the naive rule of rounding .5 or more up and .49999 down, except also I fudged it and let .5 round down when convenient (but .50001 would round up, so I doubt that mattered).

Even if all 18778 were dems (they aren't), then 239 variation is over 1% variance. So Audacious Epigone is incorrect to give an answer to a tenth of a percent.

Even giving the answer as 75% would be questionable. It's a reasonable estimate that comes from math which makes sense (unlike the 75.1% which is just an error), but I don't think it's exact. 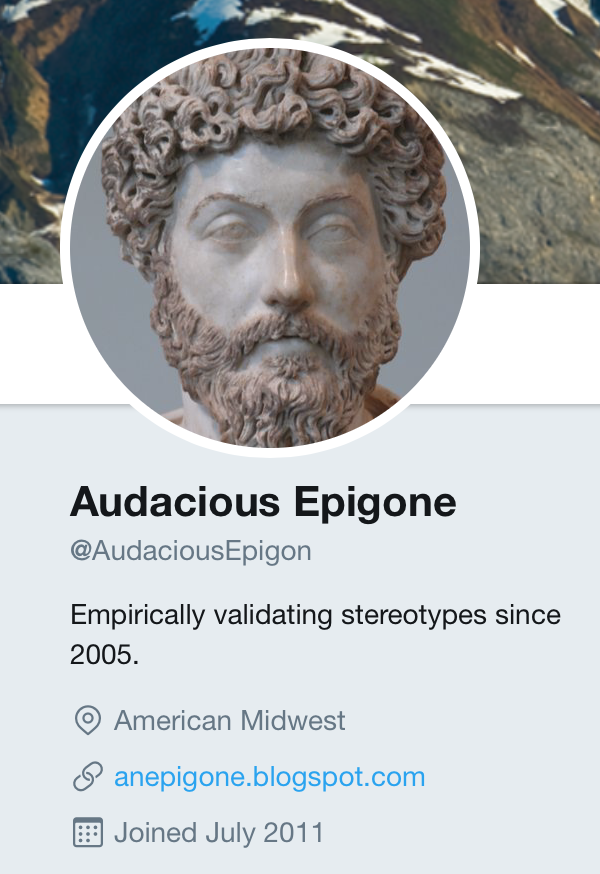 Then in comments, he claims:

> I'm a lot better at this than you are--that's fine, I've been doing it for a long time

It's easy to discover that I have a blog post from Jan 2003 on this site. And I started before I had a blog. So it seems I've been doing it longer. He should be more careful about making false factual assumptions (he appears to assume he's being doing this longer than I have).

>What do all three have in common besides a shockingly similar demographic change in the last decade? All three had been considered solidly Republican for decades, and the last week, all three Republican incumbents lost to Democrats.

vdare guy is trying to make some point about immigration and demographic change leading to GOP losses, leaves this detail out...

> But they're NATURAL REPUBLICANS! From 80 to 60 Percent White: How to Lose a Congressional District

Another Vdare article by Audacious Epigone (emphasis mine):

> If the video gave you second thoughts about whether or not to stand behind the young Templars, you’re part of the problem, *fellow white person*! It betrays a willingness to accept nothing other than the unconditional surrender of whites in any confrontation with non-whites. Stop it. You’re digging *your posterity* an early grave.

What do people think about Vdare explicitly addressing whites like that?

The same article mentions "the shit-eating grins that drive POCs and blood libelers into genocidal furies". Blood libel is usually refers to a specific kind of anti-semitic slur (the entire first page of Google search results for the term bears this out), but here the author appears to be using the term in a more general sense that includes a kind of anti-white racism. What do people think about that?

> I tested it by searching for the name of one of the earliest victims, Connie Koontz, 56. A search for “Connie Koontz” in news comes up with 554 results.

> A search for "Wilbur Martinez- Guzman", the illegal alien suspect in custody comes up with 661 results.

> And a search for Nathan Phillips MAGA hat comes up with 6,770 results. That's ELEVEN times the coverage.

It's sad if they are that stupid.

#11702 You're pretty hostile and flamey for someone who failed to figure out that basic math themselves, and who did not accompany his flamey conclusion with an explanation/reasoning.

I noticed the average thing before posting. I didn't think it was worth mentioning because it doesn't make sense.

If half the ppl do one search, and half do the other, than the avg amount of results seen (amount of coverage in front of a news seeker) is in the middle.

The reach of material depends on a weighted average of searches done and its prominence on each of those searches.

Total article counts from google are not reliable. I'm seeing 3080 for Connie Koontz. And they aren't a very good proxy for amount or reach of coverage. And most people who do google searches don't go to the second page of results. And the long tail of results is often full of irrelevant crap. Given the imprecision, maybe he should have said 10x instead of 11. But none of these are the complaints the anon in #11704 made.

> If half the ppl do one search, and half do the other, than the avg amount of results seen (amount of coverage in front of a news seeker) is in the middle. The reach of material depends on a weighted average of searches done and its prominence on each of those searches.

Exactly. They don't cover that at all. Also, there are any number of queries people could run for stories on either topic. For example, one could search for "Sophia Renken" (another of the victim's name from the first topic).

> Total article counts from google are not reliable. I'm seeing 3080 for Connie Koontz. And they aren't a very good proxy for amount or reach of coverage.

> And most people who do google searches don't go to the second page of results.

> And the long tail of results is often full of irrelevant crap. Given the imprecision, maybe he should have said 10x instead of 11. But none of these are the complaints the anon in #11704 made.

Yes. Those are additional issues. This is another illustration that Vdare's fact-checking is inadequate.