I am not now, nor have I ever been, Rami Rustom's coach or mentor. But Rami has been lying to people about me. He says that I've been his coach or mentor for ten years. That's false.

Rami (aka GISTE, a non-secret second name he uses) has been a problem poster at my free, public discussion forums. He wasn't banned (until now) because my forums are especially open and tolerant. I broadly refused to have private conversations with Rami and often heavily criticized or ignored his public posts. I did give him some advice about how to learn, e.g. to do elementary school reading comprehension homework assignments and Mario Odyssey speedrunning.

Rami has a recurring history of plagiarizing me. He self-published a book heavily plagiarizing my ideas. He didn't tell me or my forums that the book existed. When I found out, he apologized and pleaded ignorance and incompetence. I believed him since he's an idiot. Then he falsely listed me as a coauthor, without my knowledge or consent, as some kind of incompetent attempt to give me credit. When I found out and explained that was unacceptable, he removed the book from sale.

Rami plagiarizes me because he doesn't have good ideas of his own, and because he doesn't know what is or isn't plagiarism. It takes skill to know when to quote or paraphrase, when to give credit for what, and how to write the credit. Rami doesn't have that skill. When he does give credit, he often attributes ideas to people that they never said and disagree with. He doesn't know how to separate his confusions and opinions about a topic from what others said. He doesn't know when he's copying someone else's idea accurately or when he's changed it enough to screw it up. This leaves him with no way to discuss other people's ideas appropriately. He simply lacks the skill. That wouldn't be so bad if he presented himself as a confused beginner, but it’s unacceptable when he plagiarizes while framing himself as an author, lecturer, coach or expert.

Rami made another document in June 2020 heavily plagiarizing me. He didn't know he'd done anything wrong and shared it at my forum. When I complained, he apologized again:

I apologize for the trouble I’ve caused you. I want to fix this ASAP. This is now my highest priority

The plan Rami decided on was to stop lecturing or teaching, and instead focus on learning stuff like basic math. Maybe he'd return to educating others after he became competent himself.

But I recently discovered that Rami is trying to become a business coach. His attempts at teaching business use my name, plagiarize my ideas, and lie about his relationship with me. He also lies about himself, e.g. presenting his business career as far more successful than it is. (He's getting into coaching due to needing a new business and failing for over a year to come up with and start anything else.)

Rami hid his new coaching business from me for months because he'd never gotten around to learning how not to plagiarize or lie. When I expressed my concerns again, Rami told me he'd fix the new plagiarism and lying, but then, instead, he kicked me out of his Facebook group to prevent me from seeing what he was doing.

Rami has lied to business owners that I'm a smart but impractical philosopher who knows nothing about business, so Rami's bringing my clever ideas to the business world. That's a value proposition he tries to sell using my name. (I've actually studied business and sold my business expertise, and Rami has gotten many business ideas from me and from educational materials I recommended like Eli Goldratt's books.)

I have documentation and evidence, including (with permission) an 80 minute video of Rami's business coaching which enabled me to judge its quality. Lots of stuff is in the public archives. I'll share more details if Rami disputes what I've said. For now, I've tried to focus on issues directly related to me, without unnecessarily exposing Rami's other flaws.

Rami may sound like he knows something useful, but that's because he's plagiarizing me and others.

Rami lies so much and so confidently that it's hard to believe someone would do that. Don't trust him!

Rami is an incompetent business coach. If you pay the $12,000 coaching fee that he wants, you'll regret it. I think even his free advice has negative value.

Do not try to learn about my ideas from Rami.

I demand that Rami stop lying about me, plagiarizing me, and using my name to try to promote his stuff.

I'm too patient, tolerant and forgiving. My mistake. Rami is now banned from my forums and publicly disowned, but I should have done it sooner.

Rami is still trying to teach people stuff, including about TCS, without first learning what plagiarism is and how to avoid it: 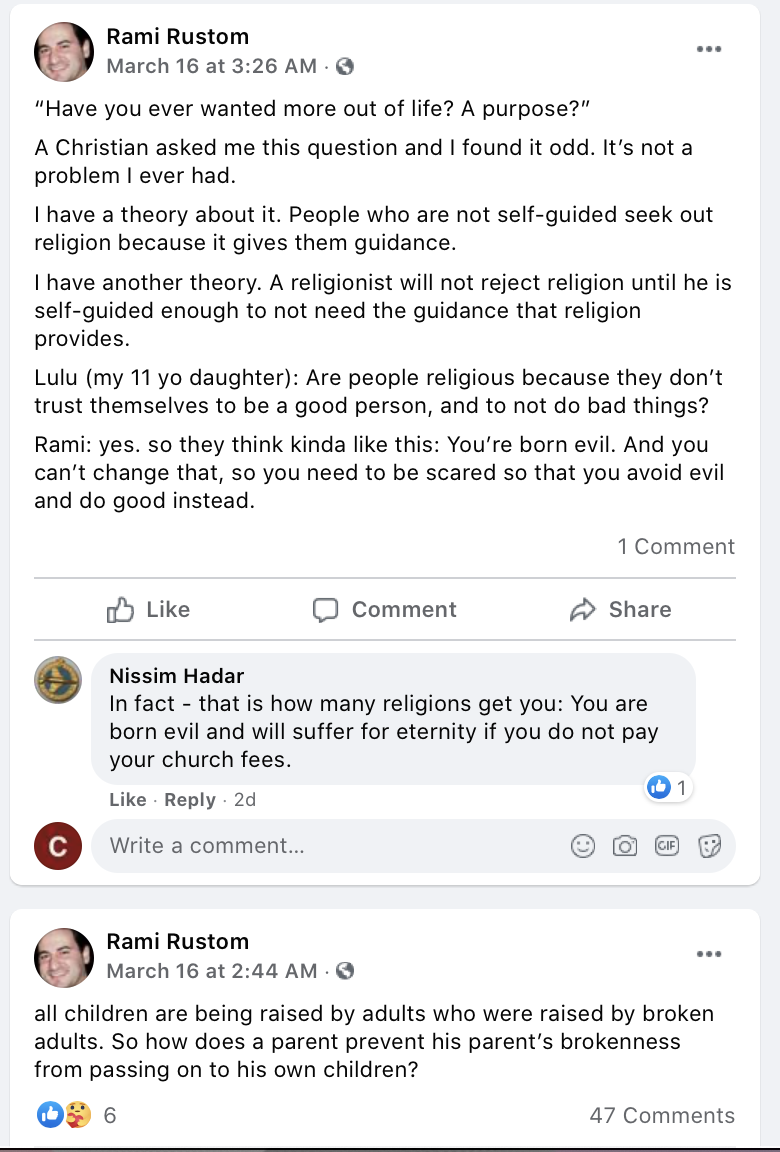