race realism and race-related IQ ideas are partially true. a fair amount of what they say is approximately reasonable. certainly not all the claims are correct. and there's one big but.

the methods psychologists and geneticists use would identify an infant-smiling gene as an IQ gene if parents are nicer to smiling infants and better-treated infants end up smarter, even though it's really not. their methods would also identify a height gene as a basketball success gene, except they try to be careful not to look like idiots so they won't make that particular claim.

ppl tend to dismiss it as implausible that parents would treat children significantly differently in reaction to minor genetic traits, but i think it's extremely plausible and fits observations of actual parents.

people routinely think their infant has a "personality", which they seem to largely make up, in their imagination, based on small traits that don't mean much. hell, people think their cat has a personality.

parents are also bad at observing children's learning processes and recognizing when the child is learning something, what he's learning, how he's learning it, and what parental actions affect the learning.

if you think parents and teachers are largely clueless about what's going on with young children, it makes sense there could be a ton of cultural transmission that they don't realize. if you think parents and teachers have a pretty complete understanding of what's going on, then it makes sense to think genes play a large role, since you will doubt they would have missed much in the way of cultural transmission.

we can all agree that children grow up with lots of traits that their parents didn't intentionally try to teach them. if you think "It's rare for a child to learn something without a teacher (e.g. parent, book, movie) which is intentionally trying to teach it.", then you're gonna think lots of traits come from genes. Where else would they come from? but if you think lots of teaching happens without conscious intention by the teacher, then you don't need to attribute it to genes.

see also: IQ (3 blog posts by me) and Yet More on the Heritability and Malleability of IQ (explains how the word "heritable" is used misleading. in technical jargon, it just means there's a correlation.)

if you want to figure out the truth of the matter you have to do something about the discourse problem. figure out some way to discuss it and resolve disagreements and organize all the arguments into something better than chaos instead of chaotically and arbitrarily ignoring a bunch.

they don't appear to be trying to solve that problem. which is typical but it means their conclusions are pretty bad.

who is a representative i could talk to so i don't have to debate thousands of people individually? and how do i talk to them in a way where, if they make a fool of themselves, thousands of people will notice and care? or if i can't do that right now, how do i earn the right to do it?

and what happens when the debate consists of me saying they don't know CR and my arguments use CR so before they can even decide if they agree or disagree with me, in a serious way, they need to learn a bunch of background knowledge? and then they say "no thanks, i don't want to learn about that or think about that. it sounds like a big, hard project." and then i say "well SOMEONE on your side should consider these ideas, right? instead of every single person on your side just ignores CR without learning it enough to evaluate it..." and then they ... go silent or derail or get mad or whatever.

they have not, in fact, done their homework of learning all the relevant published knowledge. they are totally ignorant of some of the literature.

addressing that kind of knowledge and perspective gap takes time, patience, effort, etc. what people or systems or anything do any of them have set up or available or whatever to engage in such a thing?

this happened to be a comment on the race realism advocates but could have been said, without changing any words, about the anti-race-realism advocates or about most other groups of people who deal with some sort of intellectual issue. and it could be expanded a lot just by replacing "CR" with "Mises", "Objectivism", "Szasz" or a few others. then the better question is who does it *not* apply to?

Should the sentence: "explains how the word "heritable" is used misleading. in technical jargon, it just means there's a correlation."

"explains how the word "heritable" is used misleading*LY*. in technical jargon, it just means there's a correlation."

You deserve a kick in the Tewsticles ;) see The Blank Slate: The Modern Denial of Human Nature by Steven Pinker

#12493 People here don't get views on biology from Rand. In short, they come originally from DD. But I for one *think* about the matter rather than "listen".

Rand, being a genius, managed to reach largely the right conclusions on this matter, even though she was missing various technical details that DD knows.

the suppression of dissenting ideas is evil. the left has made people feel bad for questioning their dogmas about race, gender, etc. whichever ideas are actually true, it's bad to try to shut up doubters and discourage anyone from reconsidering or investigating.

for people who feel bad about even considering race realism: instead of feeling bad about yourself, you could redirect those bad feelings towards the people who don't want you to think for yourself. they are the ones doing something wrong.

Asian high IQ may be bogus

It doesn't say anything about Ashkenazi

If the Jews are really smarter they deserve to rule :D 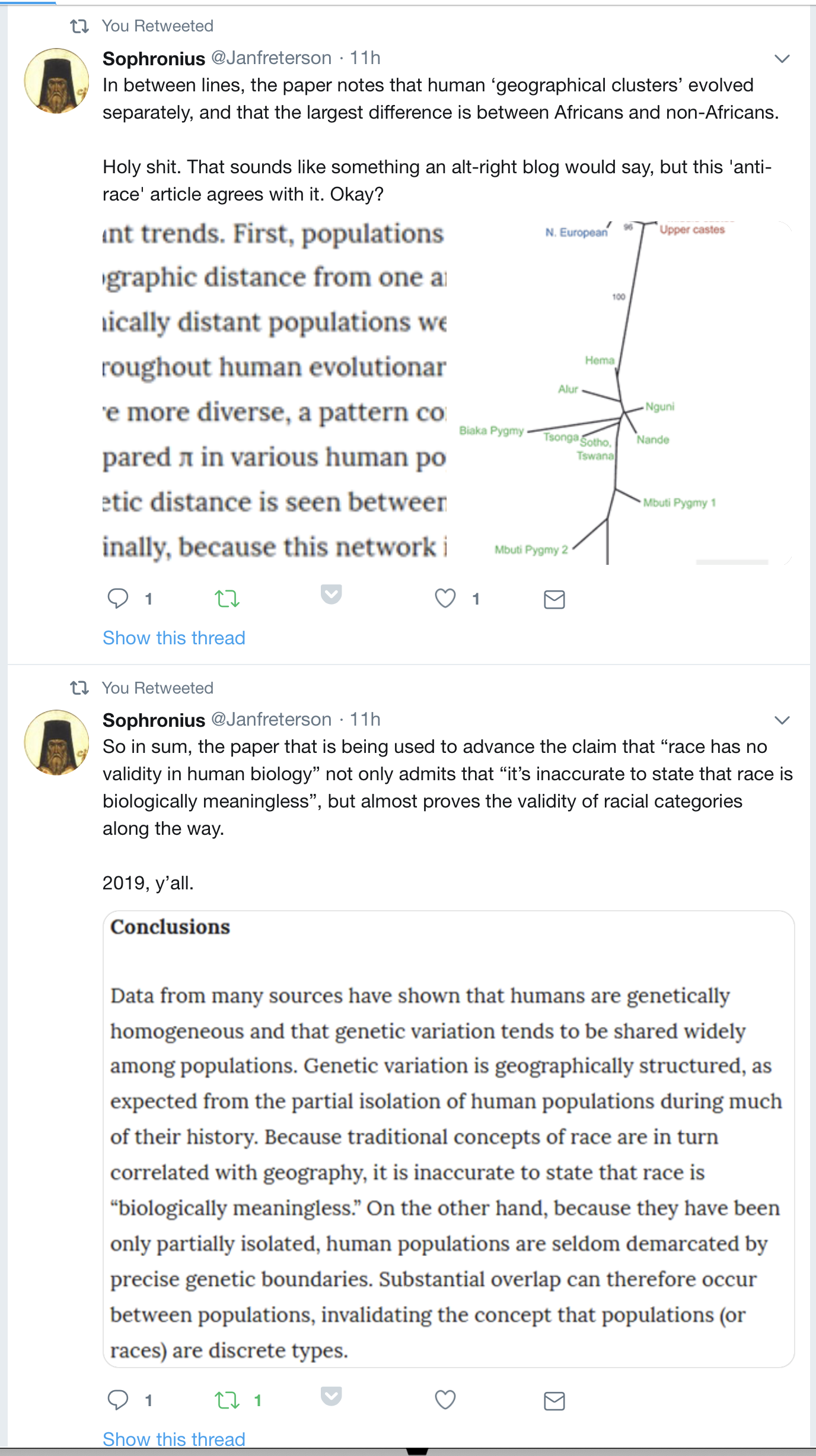 I am only replying to the notion that character traits themselves are not heritable.

I think there is already a high enough level of evidence that suggests personality traits themselves are in fact highly heritable and not just through shared environments.

If you can explain somehow the seratonin levels in some peoples brains being different through non genetic factors it would be good to know.

Serotonin is involved with thinking. The details are not well understood. But it's understood to have some broad, wide role (kinda like neurons are not fully understood but are understood to play some role in ~all thinking).

If one person is happy and reads and thinks a lot and has a scientist job, and another is "lazy" and "depressed" and has a manual labor job, that could easily result in different serotonin levels. Serotonin levels are not determined by genes like height is (given adequate nutrition and some other limited assumptions about environment).

This is kinda like asking why two computers would use different amounts of electricity per day from non-hardware factors. Answer: because they did different computations and one did more computation than the other. E.g. one was mining bitcoin all day and one wasn't.

You don't say what you mean by "heritable" and don't seem to be familiar with this field. If you study this link and figure out what it's saying, it will help you (feel free to ask questions as part of that process): http://bactra.org/weblog/520.html

In the meantime, you shouldn't repeat other people's ideas, which you don't know much about, with no citation, with the phrase "I think" in front of them. (That paper is not a cite for the paragraph beginning "I think". The paper does not contain the string "herit".)